Last week in Melbourne I went to see the Guggenheim exhibition at the National Gallery of Victoria. Created just for the NGV, the show had all the hallmarks of a blockbuster: extensive (somewhat baffling) advertising campaign, sizeable ($20) entry charge, bags of merchandise and a mixed selection of works.

My best moment in the show was seeing Maurizio Cattelan's We are the Revolution. Placed at the end of a narrow corridor which was blocked off from the rest of the final gallery, I laughed out loud when I rounded the corner and saw it (no on else did though, so maybe I'm the weirdo). It's fantastic - the slump of the shoulders, the quirk of the eyebrows, the nap of the suit. 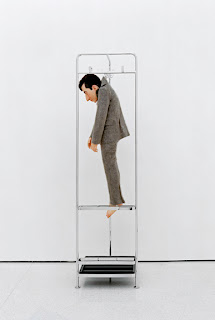 There were some other things that were fantastic to see in all their painterly fleshiness: like Lucio Fontana's exquisite Concetto spaziale, Attese (the NGV also had a beautiful Fontana on display in their contemporary international collection gallery) 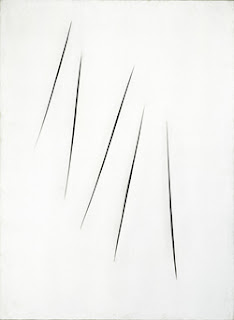 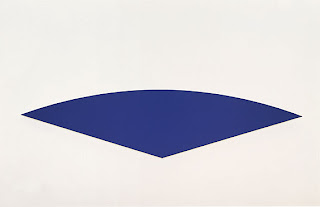 Both of these are the kind of painting that do nothing in reproduction, and everything when you get to stand in front of them. And standing in front of works was quite easy - although there were crowds of people, a preponderance of audio guides meant viewers tended to stand well back from the work they were listening too, and the guards were being fairly relaxed (although more on that shortly).

Part of the reason that the guards were being laid back was that the majority of the paintings in the first room of the show - the Pollock, the Frankenthaler et al - were inside glazed frames. This was okay for the mini Pollock, but the bigger paintings were just ruined. Motherwell's Elegy to the Spanish Republic No. 110 was almost impossible to view unless you were nose-to-frame with it: standing back to try to take in the whole work equated to watching 20-odd people reflected against a cream and black background. 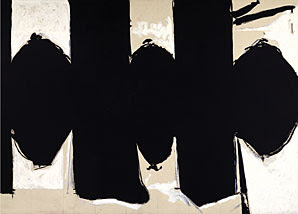 And the two glazed Agnes Martin paintings just died on the walls, which was such a shame. 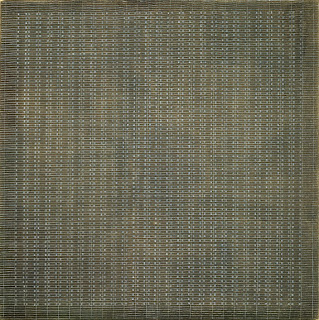 Apart from the Cattelan, my most enjoyable time in the show was spent watching the antics of the poor attendant patrolling the thin white line that surrounded Ann Hamilton's between taxonomy and communion, a long table covered with iron oxide powder and approximately 14,000 human and animal teeth.

The people actually looking at the table were very careful. The barrier line was barely noticeable, however, meaning that people passing the work to get to other parts of the exhibition tended to step over it. At which time, the attendant would streak after them and reprimand them. When she wasn't running after accidental interlopers, she was hovering anxiously and craning her neck around to spot infringements, like a chicken on speed.

Although it had some definite highpoints, the Guggenheim show was overall a disappointment - somewhat incoherent and inelegantly displayed, especially when compared to the smaller, well-chosen and beautifully hung works in the permanent collection.