A new way of being critical? 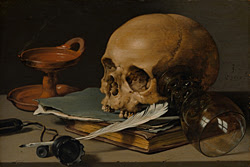 Rather than being curated by chronology, theme or schools of painters, the show presents the Met's entire holding of Dutch painting in the order that the collection was assembled:

from the founding purchase of 1871, to the major gifts and bequests of the 1880s through the 1940s, and finally to the strategic accessions of the 1950s onward. Reflecting how the Museum's great collection of Dutch paintings is closely linked with the institution's history, the installation outlines how the collection was formed, following the taste for Dutch art in America and among New York's great collectors.

While it might not work for a casual or targeted visitor (who wants, for example, a greatest hits, or to see all the Metsu's together) I find this approach fascinating. Imagine applying it to the Christchurch Art Gallery's collection of Canterbury painting, and seeing who was being bought when, by whom, and how.

Responding to the potential difficulties of the hang, New York Times critic Holland Cotter has assembled a mighty how-to-visit guide for the exhibition:

The major complication is in the show’s shape. The paintings are arranged by the date they entered the museum’s collection, not by artist or genre or city of origin. So tracking down a particular Rembrandt portrait, or all five Vermeers, or a compare-and-contrast array of floral still lifes, requires some footwork.

You’ll customize your own tour. But if it’s any help, I’ve mapped mine out. My goals were to find something of everything and to balance the familiar with the seldom seen.

Cotter provides descriptions of 13 works. These have also been turned into a multi-media guide, with images, gallery layouts and audio of the written texts (narrated by Cotter), which is well worth checking out. The audio can also be downloaded to provide a audio-tour that you can take when you go to see the show.

This wouldn't be anything out of the ordinary if it was done by the Met. But I'm astounded that a critic has gone to such effort for his readers - it's a really different approach to the role of the critic.

Note: original story via Ed Winkleman. And I'd be interested to know if Cotter worked with the Met to produce this.