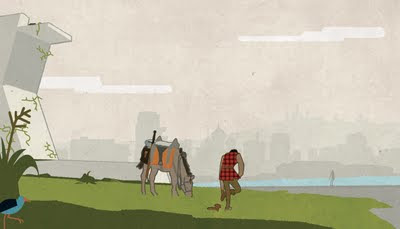 In his description of the idea, Denee references Cormac McCarthy. On the same day that I saw that cartoon I fortuitiously stumbled across a link to this 2007 Rolling Stone article about McCarthy and his involvement with the interdisciplinary science research centre, the Santa Fe Institute.

"When I was a kid, I was very interested in the natural world," he says. "To this day, during casual conversations, little-known facts about the natural world will just crop up." On a dime, McCarthy can slip into a thirtyminute treatise on some arcane biological phenomenon. "Voles leave trails where they go, like markings," he'll say out of the blue. "They're mostly composed of urine, but there are other substances as well. One absorbs ultraviolet light, which is invisible to us. But guess who can see it? The raptors flying overhead can see it. They have ultraviolet vision! That's just very interesting. You think about these birds - they're not looking for voles, they're looking for ultraviolet trails through the weeds."


It's a fascinating profile, and this is my favourite line:

"People ask me, 'Why are you interested in physics?' But why would you not be? To me, the most curious thing of all is incuriosity. I just don't get it."


I've always wanted to have something in common with Cormac McCarthy.