On stars, and thinking things through

In which I started out talking about something I like on the internet and ended up thinking quite a bit harder than I intended to.

This has been a summer break of small and quiet joys, mostly involving sunshine, reading, and sweaty physical exertion with people who I care a lot about.*

One of these small and quiet joys is Matt Webb's new-ish internet play thing, 5point9billion. It's a little Twitter bot that, after you provide it with your date of birth, tweets you regular updates on the progression of your personal light cone: the movement of the light that left the Earth on the day of your birth reaching the surrounding stars. You can read more about light cones and see how I got that description wrong on Wikipedia. And you can read all about the background and the technical details on Matt's blog.

After you've given 5point9billion your date of birth, it starts tweeting you as your light cone races towards the bright stars in the sky - first long-range forecasts (months in advance), then weekly, then day by day and then ... 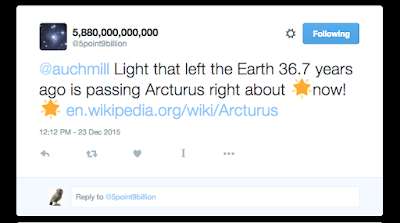 A few of my friends have signed up to the bot, and there's something lovely about seeing the days pass in all of our lives through this very gentle and abstract medium. 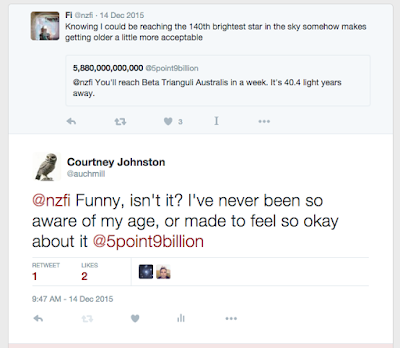 Here's one conversation that we had about that online. Usually, I balk at passing over details like date of birth, and especially when signing up for something that publishes evidence of your birthdate for all to see. But - I trust Matt Webb, and so I did it.

When you are signed in to the service you can also see a chronology of your star-past: 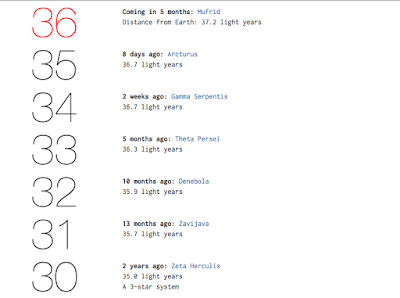 Matt's also made a little 'personal star map' app, which when you're signed in shows your relative position to the surrounding stars in three dimensions. 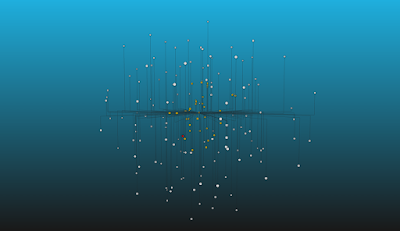 After a very busy couple of weeks, I've entered a slow patch again, and 5point9billion will fade from my consciousness until May. But I like knowing it's there, and I like knowing that it's there in my friends' lives. It's one of those very light ties-that-bind that are facilitated by the internet.

There are three things I like about what Matt Webb does. One: he makes thoughtful things. Two: he makes them in public, and publicises them just enough, so you can follow his thinking and learning and see his mind at work. And three: I get the sense that although his activities seem quite broad (tramping, hardware coffee clubs, twitterbots) they all feed into and off of one another, and that appeals to me at this time when I'm trying to figure out what my thing is.

Matt (to my eyes, anyway) doesn't have a singular 'thing': he has this kind of spangly web of interests and skills that coalesces around a line of enquiry and results in the making or doing of a thing, and these things in turn become part of that web and generate further experiments and thinking. (I also, as I mangle away at this metaphor, am thinking of contrails, those vapour trails left by planes in the sky - directional traces of activity - as a descriptor for the various things I've seen Matt make and do online, but that image lacks the generative power I'm trying to convey).

What I'm trying to express is that I am drawn to Matt's experimenting and thinking because it doesn't seem directed towards a monolithic output (an app, a research paper, a book, a podcast series) but instead strikes me as a lived intellectual endeavour that is generously shared and not taken too heavily: thinking out loud on the internet. It appeals to me because, I guess, in my small sense, that's what I'm trying to do too.

And writing this just now has made something I've been feeling uncomfortable about fit better into my head. See, I met Matt once, about five and a half years ago, at Foo Camp in the States - went to a session he and Matt Jones ran and then played cricket in the parking lot with a bunch of other English and New Zealand people. But I don't know him. When I write about him like this - speculatively, making assumptions - I'm effectively using him as a thinking or teaching aid for myself. I read into what he does what I need to get out of it: my perception of his activity helps me assess and critique my own, suggests to me where I might direct more effort, gives me a model I can use. The Matt Webb that is useful to me might be unrecognisable to Matt Webb himself.

For a while now I've been struggling with the experience of being a role model for people. It's not a new phenomena or concern for me - as far back as when I worked at National Library I had the odd person come up to me and say that they looked up to me for the work I do. It's become a bit more common as I've gotten into leadership roles, and while I do appreciate it, it also worries me.

For one thing, at 36, I don't want to be old enough to be 'looked up to' by people in their 20s - I want to be thought of as a peer, someone with just as much likelihood of getting it right or fucking it up as they have. Being a role model also feels a little bit like being put on the shelf. At the same time, one of the things I've really relished over the past three years has been being in a position where I can create opportunities for people - but hopefully for people of all ages, not just my younger/newer colleagues.

The other thing, of course, is feeling like a fake. I try to be grateful, and gracious, when someone comes up to me and says something like 'You don't know me but you're my hero' (actual quote) but I tend to oscillate between two poles. One is irritation - if I don't know you, how do you know me well enough to putting me on some kind of pedastal without any input from me? And the other, of course, is fear: If you really knew me, you wouldn't feel like that at all. If you saw me in everyday work life, hunkering down in my office, getting things wrong, missing opportunities, being snappy with people, taking the easy course of action rather than pushing harder, being pretty uninspiring 95% of the times, you'd be disappointed in how far I am from the mental model you've constructed of me.

[As a side note, I also struggle with the empty hyperbole of the internet, the awesome-isation of everything, the kick-ass and babe! of tweets and Instagram comments. I wrote a somewhat satirical piece on the devaluation of competence once, but it wasn't really all that satirical, now or at the time. The way we craft our online personalities and presences doesn't help, of course. The internet gives us much greater access to people we don't know in real life, but without the checks and balances of real life. I am discomforted (but also a little thrilled, and then discomforted at that thrill) when some of that online adulation is attached to something I've done or said.]

But writing this just now has made me realise, in a way, that this doesn't matter. (As long as I'm not a big fat con artist, anyway.) I've finally figured out that to use someone as a role model you don't need to know every in-and-out of their character or their practice. Instead, you find something in a person that helps move you ahead in whatever it is you're trying to the achieve. Something that they've done, or the way they've done it, becomes the special ingredient in your recipe. It's not about the hero, it's about the person whose story this is. The role model/hero an unwitting teaching aid. And that's kind of cool.

[An update, on Saturday morning: Jolisa Gracewood suggested in this series of tweets the model of the gravitational assist, whereby a spacecraft uses the relative movement and gravity of a planet or other astronomical object to get a leg up on its own journey by increasing or decreasing speed. This is the perfect metaphor for me because inside my head I see a planet just serenely carrying on, doing its planetary business, while the plucky little spaceship benefits from the energy of that business, without siphoning any of it off.]

So Matt - if by any chance you're reading this, I do think 5point9billion is kick-ass, and that you're awesome. But more importantly: thanks for the work you do, and the way you do it, because it is helpful to me, in ways that you probably wouldn't ever expect.

*One day I am going to write a long piece on just what it is that jiu jitsu means to me, but not today. This abnormal Wellington sunshine has made me too mentally lazy. Serious writing is a cold weather activity.
Posted by Courtney Johnston at 15:14