On Kate Camp's 'You probably think this song is about you'

[Note - all text in quotes comes from Kate's book] 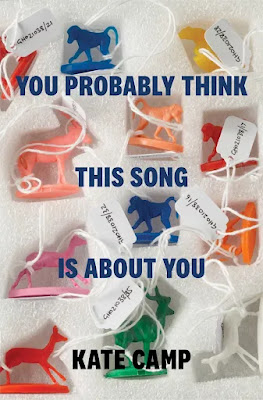 Kate Camp - Wellingtonian, poet, comms professional - has just released her memoir, You probably think this song is about you, through Te Herenga Waka University Press. I read it all in one go yesterday.

The memoir could be classed as a story of growing up female, from 1972 to now. It moves between  personal nostalgia (the close cataloguing of the contents and smells of her grandparents' home in Hastings; school assembly song choices), coming of age drama (drinking, smoking, sex), revelations of the kind we have become familiar with in women's writing (fertility battles, the small casual cruelties of childlessness) and revelations few would ever be frank enough to admit (a chapter on wetting herself, as child and adult). Threaded through this are long-running storylines: a long-term relationship characterised by addiction and abuse; the suicide of a close friend; a loving family;  an abundance of close shaves and second chances.

Kate and I work together - she's the Head of Marketing and Communications at Te Papa. I have only known her since I joined Te Papa, so many of the aspects and history of Kate that come through the memoir are, to me, just that, history. The memoir largely cuts off before the time I met her, and the smoke-soaked Kate of the book is understandable, but not quite familiar. She reminds me a lot, actually, of my older cousin Kim, who would be Kate's senior by a couple of years: another over-achieving uni drop-out, another Greenpeace canvasser, a head girl gone rogue, a pot smoker with lung-choked gurgle of a laugh, a wry accepter of everybody's foibles and flaws

Aspects of the book horrify me - in the sense of a horror movie, of watching circumstances mount up in such a way that you just know how they will play out. A young teen who can dress up in her mum's clothes and blag her way into Courtenay Place pubs. A young teen who's hanging out a 41-year-old pot-dealer's house. A young teen who doesn't value her body or her beauty, trading them off for the things she wants, which become the things she needs. A teen who enters into an abusive relationship and then stays there, a teen who bad things are happening to and who's being bad herself, being the baddest version of herself. A kid who can even then apply what I know of Kate today, the relentless logic of risk-management and a superhuman ability to manage a situation through to an acceptable conclusion:

I spent ten years of my teens and twenties with an one-again-off-again boyfriend, and we used to fight like that all the time. I remember our downstairs neighbour saying to me one time, When I hear you guys fight, and I can hear things smashing and breaking, and I hear you screaming, when should I call the police? And I didn't skip a beat, didn't think, I wonder if that's a rhetorical question. I just said, I'll call out to you. If I ever call your name, go straight next door and call the cops. He didn't have a phone.

The thing I find remarkable about the book - knowing Kate well, but not to the point of intimacy - is that while she has learned and been taught to be compassionate with herself, she does not let herself off the hook. There is an honesty that is not seeking approbation or thrills: it has just been tracked down, drawn forth, and written to the point of inevitability.

Even though it's the truth, it feels unfair and somehow cheap for me to write about Jimi's anger, his violence. It's like playing a card that changes the meaning of everything, makes it black-and-white. And it wasn't like that. I did so many things in that relationship that I'm ashamed of. I lied and stole and cheated, and I was cruel, and most of all I'm ashamed of how I used him, of how, over those ten years, I went back time and time again, always for the same reason. He said to me once I don't think you really want to have sex with me, you're just trading sex for intimacy. And I thought No, I'm trading sex for drugs and intimacy.

I'm familiar with that card. For me, it's my widowhood - ten years old this year. "My first husband died. He killed himself." It's a statement that absolves me of all responsibility. I'm not at all responsible. And yet, of course, I am.

Another point of similarity is that we're both under-reactors:

The fertility doctor had been asking me if I'd been feeling any side-effects from the hormones, any breast tenderness, night sweats, strange emotions, and I'd been happy to report I hadn't felt a thing. Now I was coming to realise that was a bad thing, my body's stoic insensibility. I was under-reacting, just like I always did.

Some of this is having thick natural buffers, a capacity to keep your head while others, etc. Part of it (for myself) is what I  think of as burnt-off emotional nerve-endings, meaning I spend a lot of time observing my emotions rather than feeling them. There's a bit of Scottish parsimoniousness (even though emotions are free), of it not being worth the effort, and some distaste for making a fuss, being a mess. At 12 or 14 I can remember trying to get a good crying jag up over some teenage injustice, standing in front of the mirror to watch myself sob, and giving up because I just wasn't that into it. Two men have left me (one to suicide, one to another woman), because, they said, in their different ways, I know you'll cope. Which is another way of saying I know you won't make this hard for me.

Kate writes about  going to a doctor for abdominal pain, and being told there's a chance she has ovarian cancer:

At some point he said that I was very calm, and I remember thinking, I don't really see what the alternative is, were there patients who would burst into tears or shriek No no no or say well that's just fucking brilliant isn't it. I said something like Well there's not much point getting upset at this stage. I had a therapist at this time - she was a Scandinavian of some kind - and I remember her saying to me once, in her northern European accent, I find it interesting that you say there is 'no point' in feeling a certain way. Do you believe that emotions should serve a utilitarian purpose? It was the kind of annoying question you pay good money for.

Many many years ago I watched a tv series called something like Child of Our Times. It was probably a turn of the millennium thing. In it, a jovial child development expert tracked the progress of a group of kids all born at the same time.

One episode has never left me. The kids would've been about four. They were testing the kids' ability to recognise and describe emotions. They set up a test where the kids listened to a taped recording of a voice actor reading recipes, in Italian, with exaggerated emotion in her voice: great sadness, great happiness, great fear. The kids were given printed sheets of cartoon faces to hold up, matching the smiley or crying face to the emotion in the recording.

The kids by and large did fairly well, but one child - a little blonde girl - failed spectacularly. She kept holding up the smiley face whenever the voice actor's rendition ached with sadness. And this was odd because this kid was preternaturally attuned, an old soul. Her family was under some form of stress (perhaps the parents were on the fringe of breaking up?) and she shuttled around, settling things down. So the jovial child development expert delved in, and asked her about the face/voice mis-match. And she said It's important people think you're happy, even when you're sad. The tenderness, sadness and self-recognition I felt in that moment still haunt me.

I have always observed but am still surprised by the fact that, when you pretend to be OK, most people think you are. You're expecting at least some of them to see through you, but they almost never do.

I have a recurring dream that I am being held hostage, or in some dangerous situation, some threatening men are there who I know mean me harm, Whatever the situation, I know instinctively that the only way to survive is to pretend I don't know they are a threat. I need to behave as if everything is fine, while calculating my escape. In one version of the dream, I am lying in bed with an intruder next to me, crouched by my face; I pretend I think he's a family member and tell him, groggily, that I'm asleep. In another I'm being held in a compound, but I walk around with my captors, politely commenting on the landscaping, while secretly looking for a way out. The dreams never resolve one way or another, but the sense on waking is of the enormous pressure of knowing your safety depends on cheerfulness, on your ability to convince others that you are blithely unaware of danger. I know my sister has the same dream sometimes.

In her acknowledgements, Kate talks about her dad's reaction to the book. Her dad loves her: both her parents do, and she them, and the largely untroubled nature of that loving is one of the things that balance out the horror movie bits. But he's upset that the book focuses on all the bruises on the apple of Kate's life, and doesn't reflect its shine: her happy marriage, her successful career, her publishing record, her literary fame, her solidity in the world. Why is she painting herself in such an unflattering light?

There's a passage in the book that sums up for me the wisdom of Kate Camp. In her interview with Kim Hill, Kate passingly references a "not very startling self-realisation of the Covid era", and this is one of these. It's not a unique realisation but you just  know she has lived in, in a thousand humdrum moments that may well make her wince to recall, but that are irresistible because when she writes them down, they make a hell of a good story:

When you think about rock bottom, it sounds like a one-time thing, but in my experience it's a place you end up going to over and over. If you're lucky, you learn something each time you visit.

Posted by Courtney Johnston at 11:58