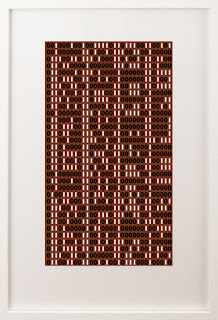 For anyone that missed the utterly inane Campbell Live interview with British art critic Matthew Collings at the Auckland Art Fair last night, the video is available here:

Matthew Collings: I'm so primitive I don't even think about binary code. I just think ovals and straight lines. And in this one they're nice and brown and black and in that one they're these weird kind of muted colours.

JB: And what's it saying? What am I meant to think?

MC: I don't think its saying anything about binary code. But maybe it is. If so, I have absolutely no idea about what that might be. Maybe it's representations of God.