There were two sheds down at the cow shed, both painted the same plasticky light blue. The Big Blue Shed was the taller and longer of the two - tall enough to have a neck-threatening mezzanine that held up six or seven decades of farming supplies; things that seemed romantically outmoded (leather horse collars, rusting hand shears) and excitingly new (coils of bright yellow plastic tubing, boxes of shiny fencing staples). The Big Blue Shed smelled of sump oil, welding sticks, grease, thick warm dust. It was a place to work on wet days, to let the kids loose in when they couldn't run round with the dogs.

The Little Blue Shed sat on a hump of earth in the middle of the tanker turn-around. It was like a barrow - low and dark, piled with abandoned stuff that had compacted over the years until it was part of the building's fabric. It smelt like diesel and dirty dirt. Once, crawling back into a corner, I found an ossified blackbird, a stiff collection of dried-out skin and feathers, lying inside a wooden crate with a chicken-wire cover.

The blue sheds came back into my mind recently, after seeing Don Driver's work at the Govett-Brewster. I don't want to go all literal on you, or use phrases like 'alchemist of everyday life', but it's impossible for me to see his banner works without the hessian and pitchforks and mysterious stains taking me back to my childhood.

I was really looking forward to seeing the show and I have to admit to being disappointed. The falling feeling began as soon as I walked into the GBAG and saw that the view up the staircase had been blocked by a temporary wall, which forced a left-hand turn into the ground-floor gallery. 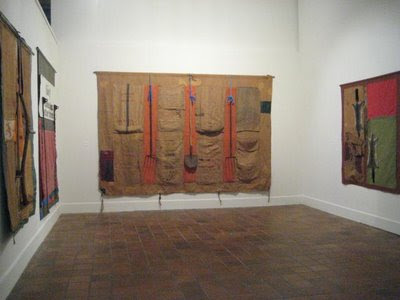 Once in the gallery, the walls were crammed with works, several familiar from the joint show with Julian Dashper at Hamish McKay's last year. Maybe the curators were aiming for a joyful jostle, but the effect was more of carelessness. My gut feeling is that work as maximalist as Driver's needs a bit of space on the wall - allowing both it and you to breathe a bit between pieces.

The sense of overcrowding was emphasised by the retention of false walls at the end of each gallery, which blocked you from seeing up into the first floor landing like you usually can (you can just see one of these in this surreptitious photo - sorry, gallery attendant, you were doing a good job really and I had trouble evading you).

It was also curious that Produce - arguably the best of these works in the GBAG's collection - was not included in the show, but instead represented rather forlornly by an postcard in the shop window.

I don't like whinging, especially not on a Friday afternoon when you all deserve an uplifting post, not a downer. But my visit was several weeks ago now, yet I'm still a bit saddened . But there is always a bright side; Peter Robinson's solo project at the GBAG - Snow Ball Blind Time - opens on 13 September, and I can't wait.
Posted by Courtney Johnston at 13:04