A little bit of a love letter to Patrick Lundberg 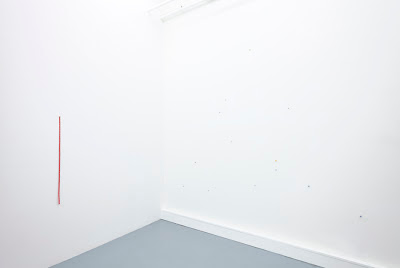 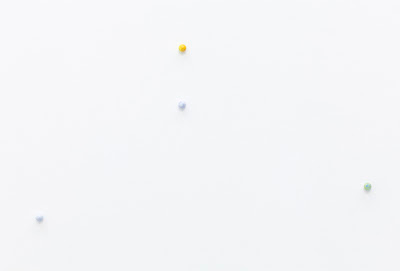 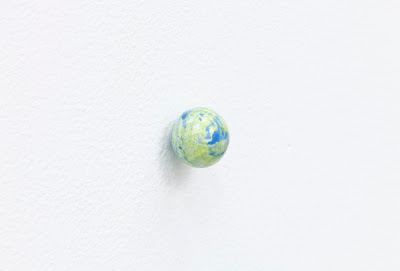 This isn't the work's fault, of course. In fact, inversely, it's the success of the work. Lundberg's mixture of subtlety and strength is one that doesn't translate to camera: it has to be felt to be understood.

I'm a unabashed fan. (I feel I should be upfront and say I've bought a number of Lundberg's pieces - why this feels like a slightly dirty thing to admit, I don't know - there's such a pleasure to be had in committing to the work of an artist who you admire.) I'd be hard pushed to explain Lundberg's work to anyone, although I'm sure that if I had a better grasp on the aftereffects of modernism and the contemporary abstract painting scene, I'd do a better job.

Take the current show at Robert Heald Gallery in Wellington, for example. 'Points, planes, eddies, regresses' contains three installations made up of scattered marble-sized balls of gesso, beautifully painted and floating on the skin of the wall, anchored by two of his signature 'shoelace' works. And I use the word 'anchored' pointedly. As the globes range along, up, and across their respective walls - like tiny planets or magnified microbes - the shoelaces hang with a weightiness completely disproportionate to their size. The strips of darker colour are a solid resting point for your eyes between each of the paler, more delicate installations - a strong vertical pause between each of the colour-scatters that your eyes have to work harder to move around and pull together. And while I use words like beautiful, exquisite, and delicate to describe this show, there's nothing weak or reticent about it. Lundberg holds that space - makes the space a part of the work and makes it apparent to you as a viewer - as surely as if these were swaggering statement works. There is something deft, considered, and effortless here that made me, when I walked into the gallery on one of those lost-in-space days, feel like the world had fallen back into its proper alignment again. 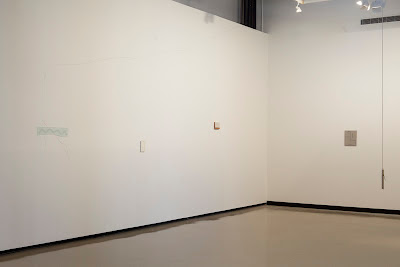 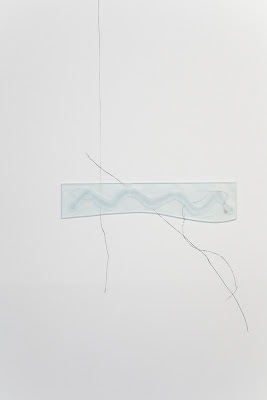 In contrast, looking back at the collaborative work Lundberg produced with Roman Mitchell for Prospect 2012 at City Gallery Wellington, that installation now looks positively tough and rough - although at the same time, a large space was effortlessly held by a small number of quiet works. In that case, Lundberg's incised and painted pieces of found material were bound together with a slim, sprawling pencilled wall drawing. A single hanging work drew out the installation into three dimensions. Like 'Points, planes, eddies, regresses', this installation was so much more than the sum of its parts - it reached out and colonised the space. And like the current show, there was a lightness of touch; a sense that the artists had walked away at exactly the point when the effort returned just the experience they wanted to create, without undershooting or overcooking. I doubt it was a crowd favourite, but it was definitely one of mine. 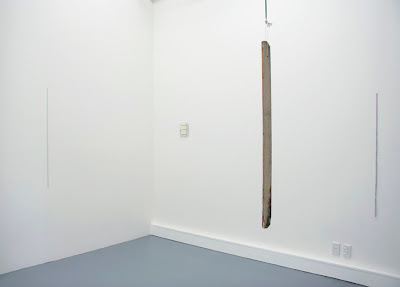 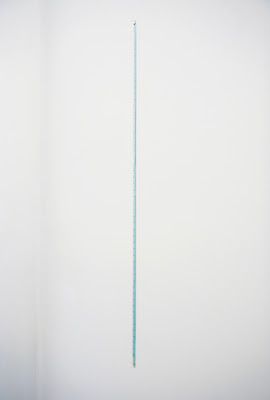 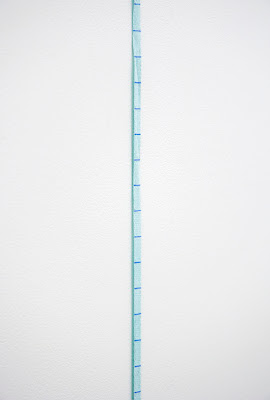 I think 'Some broken lines' at Robert Heald Gallery early last year was the first time I saw the 'shoelace' works. I've come to view these works - rightly or wrongly, and it doesn't really matter - as experiments or discoveries. I like to imagine Lundberg taking this very limited canvas, and then seeing what he can do to it, without overstepping some mysterious self-imposed boundaries. (I guess this is abstract painting in a nutshell, right? In this case, a long, slim nutshell that is soaked or tinted with colour and then marked out with dividing lines.) 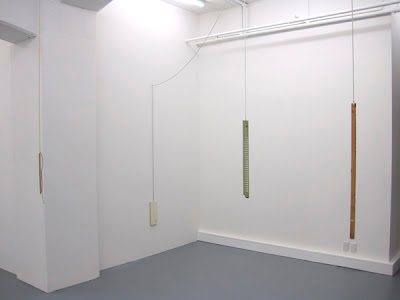 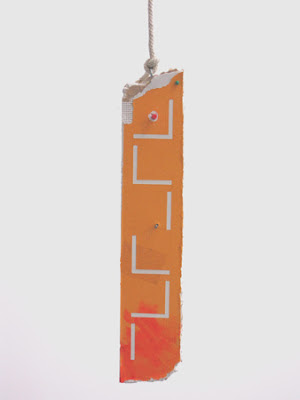 'No Longer Exactly the Same (as Before)' - Robert Heald's opening show in April 2010 - was my first in-the-flesh experience of Lundberg's work. I can remember wandering around this brand new space (brightly white against the dinge and grime of Cuba Street's Left Bank mall) and through these mysterious hanging objects (each piece of rough-edged, incised, marked-up material suspended from a satisfyingly thick piece of cord) and thinking Wow. I don't know exactly what's going on here, but I really, really like it. Sure - finding a piece of wood, doing something to it, and putting it in a gallery is hardly an earthshattering act of innovation. But there were the first signs of what I've come to look for in Lundberg's work - a mastery both of material and space - that I really responded to.


These first encounters are something I am thinking a lot about now. When I recall walking into that first show and this most recent one, I have the sensation of taking a deep breath and then slowly letting it out, and with that act, surrendering myself to the moment. Of having something impressed on me ... and being impressed in return.