Seriously, I am so out of the loop. I only just accidentally found out about the Circuit website, initiated and run by Mark Williams, which is streaming video works by New Zealand artists.

I've been waiting for this website for years. Stills do nothing to convey the nature of a moving image work. And while, for example, one of Alex Monteith's elaborately choreographed multi-channel works doesn't feel anywhere near the same on my laptop screen as it did in the gallery space, being able to re-watch and pass the work on to others is wonderful. 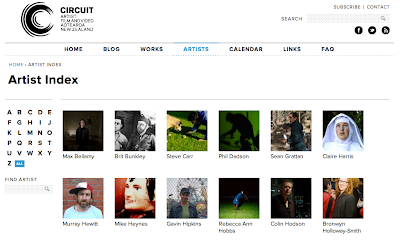 There are about 40 artists and a couple of hundred works on the site now, with more to come. I have to say, I'd love to see the rights to the Len Lye archive negotiated in such a way that his moving image works could be mixed in here - it feels right, somehow.

In the meantime, a few picks:

I was looking forward to this site when I first heard about it, but I think that conceptually it's a mess. It reads like a film person's take on art, never a happy ending where those extremely different sensibilities meet.

Hey Courtney, thanks for the kind words - Len Lye study page on the way!

Interesting comment James... do you think the two worlds are mutually exclusive? How could the site be better shaped?