That quickly-iconic Bloomberg piece on the "identikit formula of business model, look and feel, and tone of voice" of direct-to-customer start-up brands, Welcome to Your Bland New World

Complimented by Sarah Drumm's What does a made-for-TikTok brand look like?

While the Mellon Foundation has pledged US$250M over the coming five years to reimagine, create & reposition public monuments, Andry Filatov, a Russian billionaire who "owns Art Russe, a London-based foundation that aims to develop a 'greater understanding of Soviet and Russian cultural contributions' outside Russia" is keen to buy them and ship them to Russia for new lives. Alternatively, on Hyperallergic Jillian McManemin writes about her creation of the Toppled Monuments Archive, to preserve these examples in one place.

Much discussion over the last week or so as the idea is floated that London's Royal Academy could sell a Michelangelo marble sculpture to bolster its failing finances and protect jobs; meanwhile the American Association of Art Museum Directors has loosened its deaccessioning guidance in response to the pandemic, seeing the Brooklyn Museum send 12 works to auction to support collection care and the Baltimore Museum of Art release three works to advance equity programmes.

Art, heritage and slavery in Britain

232 items in the British parliamentary collection are shown to have links with the slave trade, including "189 pieces depict[ing] 24 people who had ties to the slave trade and 40 depict[ing] 14 people who were abolitionists", after an inquiry launched in the wake of the Black Lives Matter movement. Meanwhile the British National Trust has released a report showing "93 places, roughly one third of all of its properties, that it says were built, benefited from or connected to the spoils of slavery and colonialism". Not everyone wants to acknowledge those facts.

Cast your mind back about six weeks and you see the National Trust taking another pummelling, reminiscent of RNZ's plans for a youth music channel, over leaked documents outlining a "flex" to their traditional mansion offer, with more diverse and engaging audience focus: responses included National Trust restructuring plans are ‘one of the most damaging assaults on art historical expertise ever seen in the UK’ in the Art Newspaper.

A critical eye on fashion history

I love Vanessa Friedman's reporting on fashion for the New York Times. In The Incredible Whiteness of the Museum Fashion Collection Friedman takes on the absence of Black designers from the leading international fashion museum collections, including a pretty devastating analysis of the Met Museum's Costume Institute online presence. 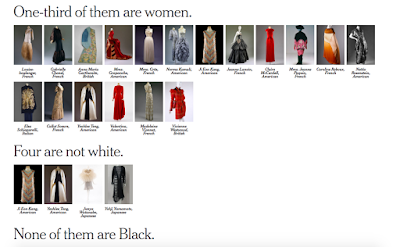 Just for the sake of it
Anne Helen Petersen on clergy burn-out: "Many religious leaders are working 21st century jobs with 20th century skills. We’re still getting trained and formed for a version of church/life that doesn’t exist anymore."
Haley Nahman on Emily Ratajkowski’s viral essay (a writer I've never encountered before, on a person who I don't relate to, writing about choice-feminism)
Mandy Brown on re-reading, especially for this quote from Donna Harkness which beautifully expresses something we in museums know to be imperative:

Posted by Courtney Johnston at 11:55