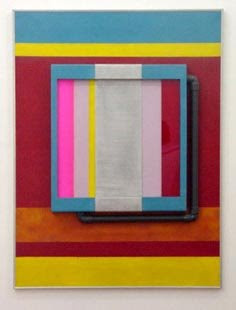 My cup runneth over with Don Driver goodness in the coming months.

First, a show of works from 1968-2008 opening at Hamish McKay Gallery on 28 May (I'm hoping for something with the enjoyability of last year's Mrkusich show, but with a few more pieces). 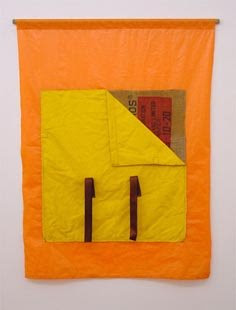 Second, a exhibition of Driver's banner works from the 1970s to the present at the Govett-Brewster, opening 31 May. 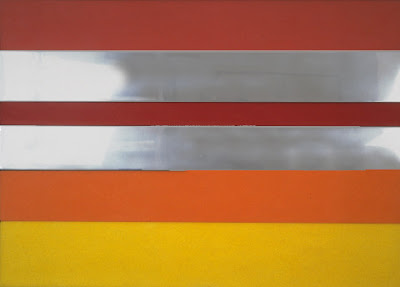 I wasn't around for the big Driver retrospective in 1999. Over the last few years though, as I've seen bits and pieces of work here and there, I've become more and more interested. With Spirit was a standout work for me in Reboot, and I really enjoyed the Driver/Dashper pairing at Hamish McKay's last year. The pieces that really ring my abstractophile bells are the painted relief works, which I've been lucky enough to see at people's houses - where the banners squawk and the assemblages growl, for me, the reliefs sing.

Don Driver, Horizontal Relief, 1973, acrylic on canvas and stainless steel.
Chartwell Collection, Auckland Art Gallery (and nice to see that the AAG's collection database is now regularly returning results on Google Image searchs, alleviating the poverty of images of New Zealand art on the web).
Posted by Courtney Johnston at 14:40