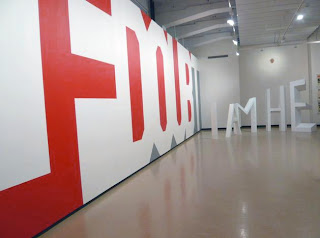 UPDATE
Thanks for the image, J.

Reboot: The Jim Barr and Mary Barr Collection, the touring exhibition from the DPAG, opened on Friday night at City Gallery.

Once again, Rose Nolan walked away with the exhibition, with her huge wall painting SELFDOUBT filling the longest wall of the West gallery. This part of the exhibition takes its tone from Colin McCahon's I am Scared / I Stand Up; Nolan's statement might seem a little abject in this context, if you didn't know that in the Dunedin installation the work was SELFLESS, and in Christchurch the cheeky SELFISH snuck round the wall to invade Michael Stevenson's hanging space.

[Side-bar: Nolan is having a solo show at Sydney's Artspace later this year - I can't find the dates online (anyone?) but it must be quite soon, as the show travels to the IMA in Brisbane at the end of June.]

Another highlight for me were three works by Julian Dashper that have been added for the Wellington installation (absent from the Christchurch installation as they were needed for Dashper's CAG show 'To the Unknown New Zealander'). I'd round out my top three with the un-monumental room in the South gallery.

However, I think I preferred the Christchurch installation: the gallery proportions seemed better suited to the scale of the work, or to function better to create small groupings of works. The piece that suffers the most, I think, in Wellington is Don Driver's With Spirit - which was my revelatory experience in Christchurch (more Don Driver, I say). City Gallery's foyer also doesn't appear to have been able to accommodate Michael Parekowhai's Jim McMurty, who's recently been vacationing at the Māori Hall in Auckland, courtesy of Michael Lett.

Don't let any of my quibbling put you off though - get along and see the show.

City Gallery: any chance you could talk to Robert Leonard and bring Nolan's show out here, as you did with Hany Armanious?

And: apologies for their not being any images here, but I can't find any installation shots online. Anyone else find it weird on Friday night that while we the audience can't take shots of the galleries, the Gallery was photographing us?

Image
Most of Rose Nolan's Selfdoubt. Also in the picture: Michael Parekowhai's I Am He.
Posted by Courtney Johnston at 13:25

Also noted: the third public gallery in recent months where the speaker has had trouble pronouncing 'curator'.

I think I may have time on Wednesday morning to get into Wellington so I will go see this on your reccommendation! Wasn't it Cosmo in Christchurch BTW? I have until recently been getting my bunnies mixed up though or maybe its some art in-joke that I am not party to :-)

It's really worth making time for.

As I understand it, there are two versions of Parekowhai's work: 'Jim McMurty' (supine) and 'Cosmo' (standing). An 8m high Cosmo was commissioned for the melbourne art fair and subsequently giftedto the NGV. The Barr's 'Cosmo' is (somewhat) more house-scaled, approx 2.5m high.