Judy Millar's exhibition 'Into the belly of the whale' at Bartley and Company on Ghuznee Street is the first time we've seen a dealer show of the painter's work in Wellington for some time (her Venice Biennale work 'Giraffe-Bottle-Gun' was shown at Te Papa last year). 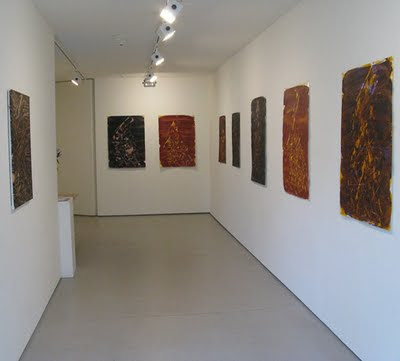 The works - eight paintings on paper and one on canvas - brim with whip-crack energy. After the large works I've seen lately at Te Papa and Gow Langsford, it was nice to return to a smaller scale, a body-to-body relationship with the work you've looking at. 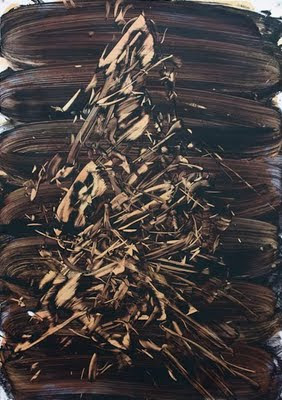 The smaller scale concentrates the visual action in each work - each frames a whipping knot of short, jagged brushstrokes in its centre, laid over Millar's signature swooping loops of thinly applied paint. Seen as thumbnails on the website, there's a resemblance to Chinese hanzi and Japanese kanji. At life size, the resemblance to a calligraphy remains, but a calligraphy that's been caught in frenzied motion rather than at rest.

I was also reminded of McCahon's Mondrian's chrysanthemum of 1908, both in terms of the earthy tones (ochres, oranges and blacks dominate Millar's works, although purple and metallic gold appear in the under-layers) and the sense of a painted ball of energy. This is an awful lot of describing words, I know, but it's hard to look at Millar's paintings without trying to capture in words the movement that she's magicked into paint.

The gallery notes state that the show can be seen as 'Miller's tribute to writer Herman Melville' - Miller was reading Moby Dick while working on the show, and the titles reference the sea (The Vessel, The Raft, The Sinking - although Google just brings up lots of mispelled dog-wanted pages for The Masstif for me, so maybe I need to get my Moby Dick out again). (McCahon also did a set of Moby Dick works of course, but I think we're lurching into the world of coincidence now.) The notes continue:

As Melville immerses readers in the world of whaling and the sea, so too Millar's richly layered gestural paintings immerse viewers in painting's possibilities. ... Millar's painting may be perceived as abstract but she has long been interested in the depiction of three-dimensional space, which is not a concern of traditional abstraction.

It's actually unusually easy to get literal and literary with this show. One work does look rather like a ship going down in a storm; the sense of streaks of electrical energy in the painting match to Captain Ahab's lightening-bolt-like scar; the whirling shapes the fatal whirlpool at the end of the novel. On the other hand, I would have been deeply unlikely to have been triggered to any of this without the gallery notes, and on the whole I think I'm playing word games rather than drawing out meanings from the paintings.

One thing I did notice when doing the rounds of Wellington's dealer galleries in the weekend. It's a lot easier to have the what-do-you-think? (and what-do-you-think-do-we-want-one?) conversations in a two-room gallery. Both Hamish McKay and Peter McLeavey have this nailed (and I'm a sucker for McKay's wood-panelled den, and the sense it has of a domestic space compared to the white box out front). Robert Heald manages to withdraw himself by placing himself in a nook to the side of the main space. But at Bartley and Company it's impossible to talk without being overheard by the person on the desk, even if you go into the stockroom space (which always feels like you're going slightly out of bounds).

Images (from the Bartley and Company website)
Judy Millar, 'Into the belly of the whale', installation view
Judy Millar, The Battle, 2011, oil and acrylic on paper, 705 x 1000mm
Posted by Courtney Johnston at 09:00