A great story this week came out this week about how the designers of L.A. Noire used archival research to underpin the look and feel of their game. A police procedural, the game is set in c. 1947 LA:

The USC Libraries' Regional History Collection offered production designers a sense of how city streets and sidewalks looked at night. USC's Dick Whittington and Los Angeles Examiner photography collections cover the same time period as the video game. The Whittington Collection—preserving the work of the Dick Whittington Studio, from 1924 until 1987 the premier commercial photography concern in Southern California—contains a number of streetscapes captured after dark, including the photo of Vine Street in Hollywood below. 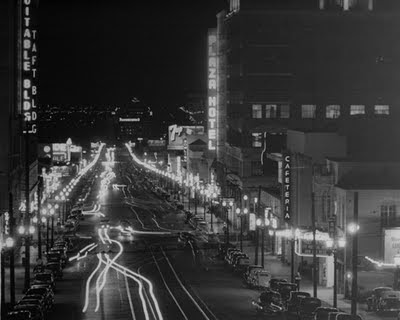 In related areas: in my feedreader today I found writer Lev Grossman's post on writers who love video games:

Then there’s a recent game like Portal 2 (I’m just plucking examples out of the ether here). I played through it a few weeks ago. Look at the tightness of the plotting, the economy and discipline and humor and sharpness with which they sketch out the characters. These are things we usually look to novels for. But by those standards Portal 2 is the best novel I’ve read this year.

One of my favourite blogs is Pippin Barr's inininoutoutout, a chronicle of game playing and invention. As a non-gamer, it's taught me to look at games as a feat of design and psychology, and I highly recommend it.
Posted by Courtney Johnston at 12:41