Friday's child is ... pissed off 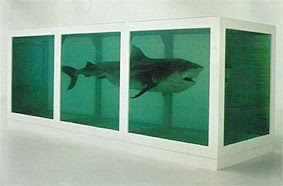 Reviews like this make me wonder whether people who clearly hate contemporary art and all it touches should be allowed to write about it.

"Thompson sets out to discover why someone thought it was fulfilling and rational to spend $12 million buying a dead shark that had been turned into an artwork by Damien Hirst. "

"In what sense is a buyer acquiring a unique work, if the artist feels free to create near-identical pieces for other buyers (as Warhol did and Hirst does)?"

"In what sense do they [artists] “create” artworks that unnamed assistants actually paint, cut up or assemble?"

"Should we lament the present confusion between cash price and artistic worth – or, as Thompson puts it, “the ease with which art history is now rewritten with a cheque-book”?"

"Is the success of a few superstar artists good or bad for the rest – those who scrape by on the poverty line, yet produce art that may well be far richer in significance than some of the conceptual piffle churned out by the big names?"

Image: Damien Hirst's The physical impossibility of death in the mind of someone living (1991) - conceptual piffle. Image from boingboing.net.
Posted by Courtney Johnston at 10:46