Bits and pieces of information about the project have been leaked to the press. No images though, apparently, with the New York Sun instead presenting this artist's impression, helpfully captioned "above, a waterfall and a view of the East River". 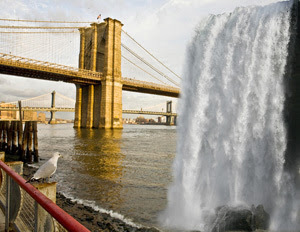 Reporters may have had more luck searching Flickr, where one user has posted a photo of a waterfall installed at the University of Dundee by Eliasson in 2005. The photo is helpfully titled Eliasson's 'Waterfall' Is This Art? Discuss.
Posted by Courtney Johnston at 09:30