I've been checking the One Day Sculpture site faithfully since Friday 7 March, as I'm genuinely interested in knowing who's doing what when (see Over the net's post this morning to this effect).

Now I find out I need to wait for another fortnight. 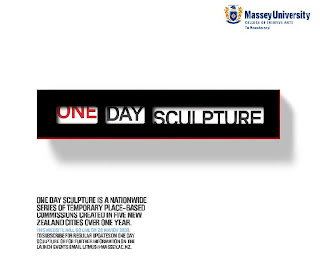 Posted by Courtney Johnston at 09:02

Is the NZ Art blog world too small when I can think of 3 that have mentioned the One day Sculpture website (or lack thereof) in the last few days? :-)

check the white text at the foot of the page

"Co-hosted by One Day Sculpture and the Wellington City Council Public Art Panel.Wellingtonians puzzled over recurring queues around the city last week, as part of the launch of one of the most ambitious art events ever staged in New Zealand.

During the One Day Sculpture project, 20 public artworks will be created in five New Zealand cities, existing for no more than a 24-hour period.

One Day Sculpture was launched in Wellington on Friday 7 March, accompanied by the first work in the series – the celebrated Good Feelings in Good Times, by participating artist Roman Ondak. The work, on loan from the Tate Collection, London, consists of a queue of people that forms across various locations during the course of a day.

Ondak is well known internationally for staging familiar scenarios in which unexpected actions occur. He recently received the rare honour of a solo exhibition at Tate Modern.

The full One Day Sculpture programme will begin in June and continue until June 2009 in Auckland, New Plymouth, Wellington, Christchurch and Dunedin.

Initiated by United Kingdom-based curator Claire Doherty and Massey University's Litmus Research Initiative, One-Day Sculpture is a series of place-responsive public artworks by national and international artists. The works will reflect a diversity of artistic approaches including sculpture, installation and performance events.

Ms Doherty says One Day Sculpture is the first international art project of its kind. "Taking time, space and place as its inspiration, the project turns the concept of a scattered-site exhibition of new artworks on its head, offering the opportunity to engage with each newly commissioned artwork for one day only, one after another, as a cumulative series over one year.

"The 20 new works will accumulate over 12 months across the country forming a dynamic and long-lasting reconsideration of what sculpture can be. They will challenge conventional assumptions about permanence, monumentality and the public realm."

Maybe they need to do some research