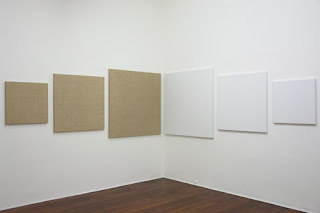 After several years in the doldrums, the Adam Art Gallery at Victoria University is re-emerging, with the appointment of a new director, Tina Barton, earlier this year and the opening of her first show Four Times Painting on Saturday morning.

Bucking the Friday night trend and opting for a morning opening had two advantages. First - people weren't all end-of-the-week bitchy and trying to get drunk quick. Second - the Gallery looks its best in daylight, a fact you tend to forget.

Four Times Painting brings together the work of Simon Ingram, Shane Cotton, Julian Dashper and Isabel Thom. According to the website:

Four Times Painting focuses on the work of four contemporary New Zealand artists, who each critically engage with the history and practice of painting.

Acknowledging painting as a medium that has come back into critical focus, the exhibition enlarges on this medium’s current situation and considers how painters today engage with its history, purpose, and material practices. Curated by Christina Barton, Director of the Adam Art Gallery, it features the work of Simon Ingram, Julian Dashper, Isobel Thom and Shane Cotton, four artists whose works can be approached as complex and multilayered meditations on painting’s relation to time.

Each of the artists got their own space within the Gallery: Ingram in the Chartwell gallery on the first floor, Cotton in the cave-like Kirk gallery on the mid-floor, Thom in the bottom of the stairwell, and Dashper in the ground floor Chartwell (his paint-splattered drum kit from the Auckland Art Fair is also displayed in the top floor window).

Cotton's and Dashper's installations were particularly strong. The Kirk gallery was painted black, and Cotton's three statuesque recent paintings hovered spotlit on the walls. It could have been too spooky for its own good, but I think it worked.

Cotton gave a quick talk as part of the opening events, and it was interesting to hear him focus on mark making and painting as an activity, rather than about what the paintings 'mean' (though there were several bird-related queries at the end of the talk).

Dashper's installation on the ground floor gallery was both immaculate and kick ass, and beautifully set off by the natural light. The installation brings together a number of untitled works from 2006 including the work shown above, which at the Adam is hung vertically, giving it a looming, giant-like effect. Dashper will give a floor talk in July.
Posted by Courtney Johnston at 15:40