From Jerry Saltz this week, a review of the restaging of Dan Flavin’s "historic breakthrough exhibition" in 1964 at the Green Gallery, currently being held at Zwirner & Wirth gallery, New York.

At the end of the review Saltz muses on which other historical/historic exhibitions he'd like to see restaged:

My short list includes Pollock’s retina-ripping 1950 show at Betty Parsons that contained Autumn Rhythm, One: Number 31, and Lavender Mist; Jasper Johns’s astounding solo debut at Leo Castelli 50 years ago this past January, in which he exhibited Flag paintings, Targets, Numbers, and letters; and Cady Noland’s 1989 debut at American Fine Arts, if only to recall the shock that came with not knowing what one was looking at.

Immediately after reading the intro to the review, I thought of a similar thing in a NZ context. The two shows I've always really regretted not being around for are 'When Art Hits the Headlines' and 'Headlands'. Another set of shows that popped into my mind were the set of GBAG shows from the early/mid 1990s, when Shane Cotton, Michael Parekowhai, Yuk King Tan and their ilk stepped out on stage. I wonder though if you can really relive the shock of the new with anything more than fond nostalgia?

I think you also have to make a distinction between shows you wish you'd been around for, and shows you wish had come to New Zealand (into which category falls most of Michael Stevenson's recent work). However, in that context, Stevenson raises another category for me: stuff I did see, but wasn't able to comprehend at the time. Oh well. One day my Tardis will come (and I want to current Doctor, please).
Posted by Courtney Johnston at 11:54 1 comment:

An obituary of Peter Tomory, from the Melbourne Age.
Posted by Courtney Johnston at 09:56 No comments:

What are you thinking? Take Four

The lastest in this ongoing occasional series...

This month, you are thinking HANDSOME. Search terms bringing people to this blog over the last couple of weeks include:

And a new question emerges: 'jobs that give you a clothing allowance'.

* Best of 3 has pondered this question at length, and the answer is: visiting art galleries and then blogging about it.
Posted by Courtney Johnston at 16:49 3 comments:

¡Give me some images!

My visit to ¡Cuba! Art and History from 1868 at the Montreal Museum of Fine Art was overwhelming. The show contains not only 400+ objects, but a vast amount of didactic text which pinned each section of the show to its historical moment, and only a small number of benches. *

My assumption was that when I got back to NZ and wanted to talk about the show, I'd be able to go to the website and refresh my memory. Sadly, the exhibition website - and this is for the largest outing ever of Cuban art, showing only in Montreal - has exactly 6 images from the show. And the text is hardly designed to evoke the experience; here's the introductory paragraph:

Organized and presented by the Montreal Museum of Fine Arts from January 31 to June 8, 2008, ¡Cuba! Art and History from 1868 to Today, which brings together some 400 works of art, is the most important exhibition ever presented to showcase the art of this Caribbean island, which Christopher Columbus described as “the most beautiful land eyes have ever seen.” Thanks to the collaboration of the Museo Nacional de Bellas Artes and the Fototeca de Cuba, and of many collectors and museums in the United States, including the MoMA, this exhibition draws a broad panorama of Cuban art and history. This lively and well-conceived multidisciplinary exhibition brings together about one hundred paintings, including a huge collective mural produced in 1967 by many artists, two hundred photographs and documents, approximately one hundred works on paper (in particular two collections of pre- and post-1959-Revolution posters), installations and videos, in addition to music and film excerpts.

Excited? No? That's a shame. I spent two hours in the show, and would love to have been able to reflect on it without shelling out CA$70 and carting the catalogue home (more about my penny-pinching ways shortly). Over the net have previously posted about the paucity of images on gallery websites, and I have to agree - y'all can give us text til the cows come home, but we're coming to you to look, not read ....

* There was also the fact that each work had three labels; French, English and Spanish. I never managed to train my eyes to read just one, not all three.
Posted by Courtney Johnston at 15:35 3 comments:

One of the things I looked forward to most on my trip was the Simon Starling show at The PowerPlant in Toronto (headed by ex-GBAG director Greg Burke).

The show didn't disappoint. As a whole, it had quite a stern, elegant feel - large works spaciously displayed. Even works that weren't big felt like they were - especially Infestation Piece (Musselled Moore), the show's central focus: weighty, tactile, affecting whether you knew the art historical and social backstory or not. 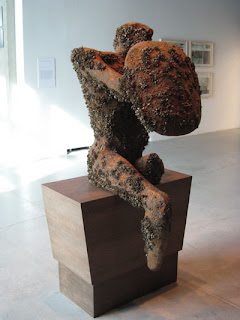 Starling's work in the flesh reminds me a lot of Michael Stevenson - the intently researched, deeply idiosyncratic, beautifully produced aspects of Stevenson's way of working. I'm never sure about the humour in Stevenson's work though (is it there? is it there for us, or for him? should I find any of this funny? it is funny though, isn't it? isn't it?) but I like the absurdist tinge of Starling's earnestness, best exemplified in this show by Autoxylopyrocycloboros, 2006, the slide show that records Starling and a helper slowly destroying the small boat they are floating in by feeding it piece by piece into a woodburner. 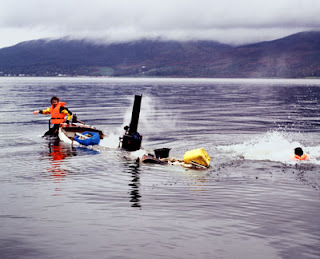 The only disappointment was the resounding quietness of the galleries - admittedly, it was mid afternoon on a weekday, but I did wonder if the locals feel the love for this GBAG in the big smoke.

Images from the PowerPlant website
Above: Infestation Piece (Musselled Moore) 2007
Below: Autoxylopyrocycloboros 2006
Posted by Courtney Johnston at 13:08 No comments:

So. What you want to do is time your visit to the Canadian Centre for Architecture right at the end of the day. Leave the CCA, and head down to the port. Dawdle so that the sun starts to set and the sky turns that ridiculously romantic, Cindarella shade of pinky-lilacy-blue. Stand and watch as people start to turn on the lights in their homes in Moshe Safdie's Habitat 67. Take in the way this utopian complex manages to look modernist and ancient and brutal and sad, all at the same time. Consider the fact it's now a privately-owned condomininum complex. Walk on slowly. 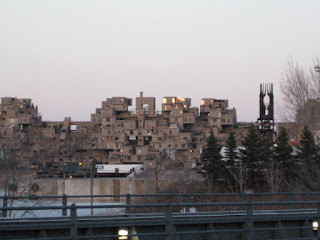 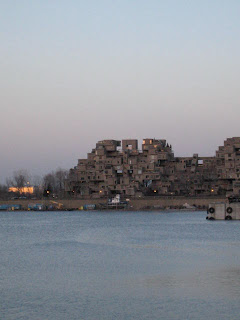 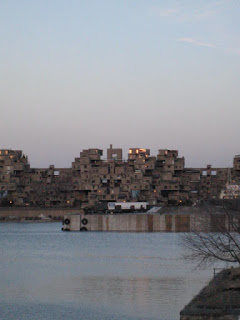 Images:
top - reference view of Habitat 67
bottom - Habitat 67 at twilight in early spring.
Posted by Courtney Johnston at 12:03 No comments:

Something to write home aboot

Struggling with jet lag, I wasn't able to properly take in the extraordinarily detailed show 'Sorry, out of gas' at the Canadian Centre for Architecture. So instead, I settled for appreciating their elegant exhibition design... 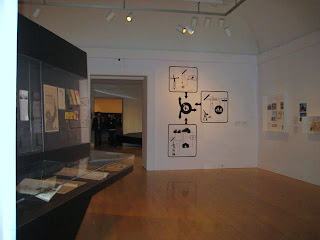 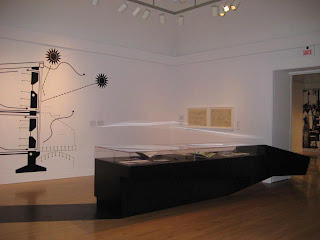 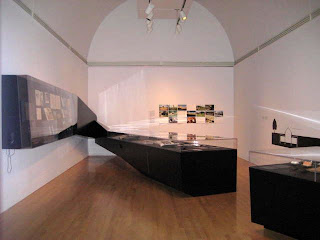 I've never seen such poetic display cases. Architecture shows are tricky - what could be harder to evoke than another building inside a gallery space - but this one was beautiful to be in. If you're going to Montreal, I'd make the CCA the must-do gallery stop: from what I saw, the shows are intelligent, the collection extensive, the building an interesting merger of 19th-century and contemporary, and the bookshop's nothing to sneeze at either.

In the meantime, check out the very Flash Sorry, out of gas online exhibition.

Apologies for the badly-exposed photos, and thanks to the nice man at the CCA who let me take them.
Posted by Courtney Johnston at 17:43 No comments: 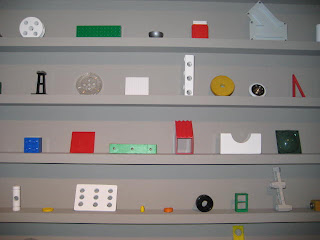 Detail of Douglas Coupland's Brick Wall, at the Candian Centre for Architecture. Proper, insightful & stimulating posts on their way soon ...
Posted by Courtney Johnston at 10:55 3 comments:

Back posting around April 21st.
Posted by Courtney Johnston at 11:42 No comments:

Via Edward Winkleman, this New York Times article on gallerinas.

Published in the Fashion & Style section, it has insights ranging from the "yeah, I can believe that":

“Everyone wants a look,” observed Ms. Pasquarella, the art consultant. “They want someone who dresses a certain way: Armani, hippie-dippie, freak. It’s about building the gallery as a brand. And it’s divorced from the art on view.”

Assistants hold the public at arm’s length because, frankly, that’s not where the gallery’s clients come from. Top dealers, who must manage an artist’s career and cachet, are exquisitely selective about buyers. The public is almost irrelevant: encouraged to look and buzz loudly, but that’s about it.

“A gallery is not like a retail store,” explained Ms. Plummer of Lehmann Maupin. “For every 100 people who walk in, maybe one-half of one person actually buys something. It’s rare that collectors even come to the galleries — it’s mostly art advisers. And they have appointments.”

Somehow, the commentary on Ed's post has gotten wound up in the issue of art-uninterested punters making use of dealer galleries' toilet facilities. As Ed acknowledges, it's all a bit of a beat-up, even if it is a funny one at times - I'm sure it wouldn't have so much mileage if the term 'gallerina' wasn't so fun to bandy around. I've found New Zealand dealers to be a pretty friendly lot (and often well-dressed) - maybe the key difference is that our dealers are usually out on the floor when you visit.

In a completely different vein: 10 things to keep in mind when making art from trash / pizza / PeaRoeFoam, via C-MONSTER.net.
Posted by Courtney Johnston at 12:03 2 comments:

Throwing the floor open: I have a question that I can't answer via Google (I know! quelle horreur!).

When did dealers start using a red pin to indicate works that had sold in a show? Who started it? Where does it come from?
Posted by Courtney Johnston at 13:47 7 comments: 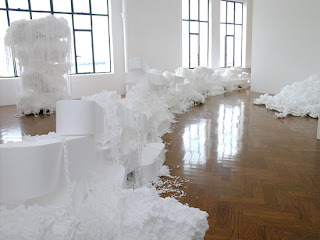 I tried several times to name this post, but you end up feeling like such a goober when you apply words like 'beautiful' or 'breathtaking' or 'extraordinary' to contemporary art.

All I can say is, if you're in Wellington over the next few weeks, make sure to stop by Peter McLeavey's and see Peter Robinson's one work show. As McLeavey doesn't have a website, check out similar recent works (including those shown in the above image) on the Sue Crockford Gallery website.

Along with Rose Nolan's wall work currently on show at City Gallery, Robinson's sculpture is already on my best-of list for 2008. Related to which - info about Nolan's Artspace Sydney show in May/June is now available, along with this image of Nolan working on the CG work. 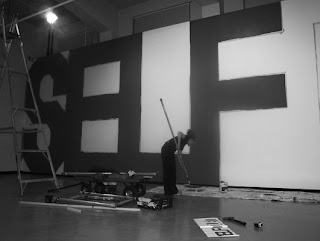 Posted by Courtney Johnston at 13:32 4 comments: