At work this week we started resurrecting some diorama removed five years ago from the Petone Settlers Museum, including a scene of tree felling used to tell a story about deforestation in the Hutt Valley floor (it strikes me that this melted face is a bit of an issue).

Dioramas are intriguing. I think it's the distillation and abstraction that they offer. Their three-dimensional nature means it takes more time for your eye to move around, discovering all the details (more like our experience of the real world than a flat picture) and at the same time the reduction of detail leaves room for the imagination and gives the experience aesthetic rather than realistic (also, when you take a photo of a diorama it immediately looks like you've flicked on the tilt shift tool).

I guess then I was primed for this post from Russell Davies about his visit to the Wellcome Collection's Forensics show. There's a real irony that his main observation of an exhibition that's all about close looking was that "everything was too dark and too small for an old person like me to read. I know they have to keep things dark to preserve the documents but I don't understand why they can't blow things up and stick them alongside the originals."

I always enjoy Davies short observations on attending exhibitions because he brings the lens of user experience design from the web to the gallery setting - and because he has a deep visual affinity. The main thing I took out of this post though was his pointer to the Nutshell Studies of Unexplained Deaths, a set of 18 incredibly detailed diorama made by Frances Glessner Lee as an aid for teaching the techniques of crime scene investigation in the 1940s. The diorama are displayed in the building that houses the Office of the Chief Medical Examiner in Baltimore, and have been more recently closely documented by the photographer Corinne May Botz.

One of my favourite podcasts, 99% Invisible, has just done a show in the dioramas. Actually, it's about much more than the diorama, fascinating as they are: the story is really about Lee, the child of a wealthy family who, when she came into her independence, took her interest in crime scene investigations and turned it into a mission to better educate the police force and change the way unexplained deaths are approached.
Posted by Courtney Johnston at 09:43 No comments:

An article on Art Info about ticket prices at the newly opened Whitney starts off quite same old-same old and then rapidly gets more interesting. 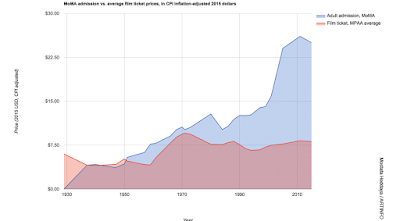 Take for example the increase in inflation-adjusted dollars for movie tickets and MOMA tickets since the 1930s. An institution like MOMA can raise prices steadily because the tourist market they cater widely to (the 56.4 million tourist visitors to NYC last year) is price-insensitive; a visitor to New York expects to pay and (generally) isn't going to stress about five dollars here or there.

There's also a fascinatingly discussion at the end of the article about alternate pricing models. Scotch discounts for seniors in favour of residents, or start defining 'adult' as 'over 25' in order to reach the more visit-inclined university-aged audience. Or - possibly most intriguing - demand-led pricing, a la Uber.
Posted by Courtney Johnston at 17:17 No comments:

Today on the radio

Today on the radio I talked about Lisa Reihana's new work at Auckland Art Gallery and the design collective nominated for the Turner Prize.

Posted by Courtney Johnston at 13:47 No comments:

That's all anyone wants 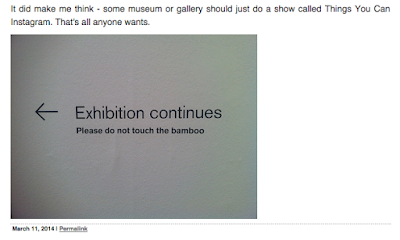 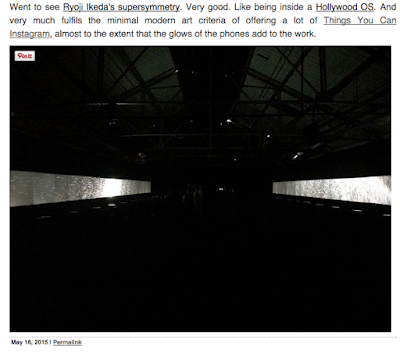 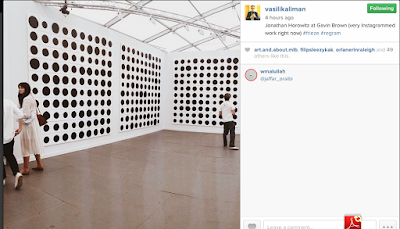 Posted by Courtney Johnston at 13:18 No comments:

There's some not-entirely-joined-up thinking floating around in my head about public radio (American, especially, but ours as well) and public art galleries and museums. Something about how radio is moving from broadcast, time-based listening to podcasts, and the way we're all thinking about how to maintain or increase physical visitation (upon which we are funded) whilst appealing to the online audience (which is connected to us by interest and inclination - but not necessarily geography). About how the web feels like the easiest, and most rewarding, place to be innovating. About how the ever-increasing choice of what we as consumers of culture can do with our leisure time, and the worlds upon worlds we can access online, makers us increasingly pickers and choosers - curators, if you will* - of the things we deem worth of attention, and how we can love things, but how we express love through retweets and favouriting - and not through actions that count towards the objects of our affection's bottom lines.

Like I said - it's hazy at the moment. But this afternoon my thinking has advanced a bit thanks to this article by Niemann Lab visiting fellow Melody Kramer, on her research project about public radio membership.

Though membership has always been a core part of public media, over the past several years, public radio has been grappling with new questions concerning membership and listener loyalty. The traditional form of building membership and leveraging organizational loyalty — the pledge drive — has declined in effectiveness, and new conversations are beginning about how to recruit and retain members who access content off-air.


Kramer is documenting her fellowship on Github (I love the daily blow-by-blows where she struggles to stay on top of her inbox AND kickstart her residency). Most interesting so far is this thought experiment about what a public radio station would look like if she started one from scratch - because blow me down if it doesn't sound exactly like what one of my museum friends would write.

Anyway. I'll keep following Kramer and if her thinking helps mine get clearer ... well, that would be a godsend, and you all will be the first to hear it.
Posted by Courtney Johnston at 16:56 No comments:

When I listen to my favourite podcasts - Slate Culture Gabfest, 99% Invisible, NPR Happy Hour - I feel bad when the sponsored ads come on. Not bad because I don't want them there - bad because 90% are products I can't use (stamps.com, anyone?) and therefore I feel like the hard-won sponsorship dollar, based on listener numbers, isn't being followed through on by this particular listener.

In the Kickstarter-environment, I've come to see these sponsored ads as a way that I can support the podcasts I enjoy. I donate my ears to them. I never skip them, because I appreciate that these businesses are helping make sure that something I really enjoy continues to exist. It is unlike any other advertising relationship I can think of in my own life.

So on that note, this article on The Awl is fascinating: Podcasting and the Selling of Public Radio.
Posted by Courtney Johnston at 21:43 No comments:

A solid article from the Economist on the demographics of American museum directors (check out those age stats) - pity it ends on the over-tooted "or risk becoming irrelevant" note.
Posted by Courtney Johnston at 16:33 No comments: