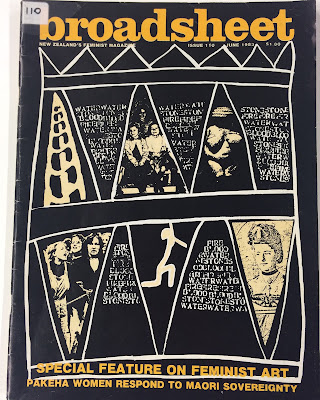 Juliet Batten was asked to write an article about New Zealand feminist artists; she had recently returned from a trip to America and was interested in the differences she saw between American and New Zealand women artists.


“In America the term “feminist artist” didn’t appear to be a loaded one, it was freely used, apparently without difficulty. In New Zealand the term seemed fraught with danger. It aroused fear, confusion and distate on the part of women artists. I suspected it wasn’t simply a matter of disliking lables per se. It seemed to be a matter of this particular combination of labels. Like oil and water, art and politcs don’t mix – or so we have been indoctinated to believe. Despite the “personal is political” stand of the women’s movement, most women artists still seem to believe feminism and art are indeed like water and oil.”


“To be a declared feminist artist is to sign one’s death warrant as far as the art establishment is concerned: this at least is the fear. When we note what misogynists hold the power in the art world (witness the anti-woman line of Art New Zealand) the fear becomes understandable.”

Rather than write a definitive article assigning women artists as feminists, Batten decided to send two questions to 35 artists ‘whose work might suggest a feminist perspective’:

A group of two women in their early 50s, Jacqueline Fahey and Vivienne Lynn. ‘Each tells of her struggle to find her direction before the days of the women’s movement. Each produced what might be now understood as feminist work. … For both these women, the definition “feminist” is primarily one that gives permission to draw on the content of their own lives, to identify the “problem without a name”. It also means bringing a political consciousness to bear on this material.’

A group of women mainly in their late 30s or early 40s ‘whose responses show a lack of clarity or even avoidance of question 1. This may reflect the fact that artists do not necessarily express themselves easily in words. It may also indicate fear, or isolation. One woman came up with an answer for Question 1 only after being prompted, and said she feared writing anything the art establishment might use against her.’

A group who ‘finds no problem fusing the terms feminist and artist. … This is also my own position’.

A group for whom ‘there is an assumption that a feminist artist is one who produces only political work’.

Each contribution includes the responses to the two questions, brief biographical information, and the reproduction of two works.

(While Batten notes 18 respondents, only 14 artists – including herself – are featured.)

The section in the magazine opened with a black and white image of a Jacqueline Fahey work, No. 11 (painted 1958, destroyed 1962). 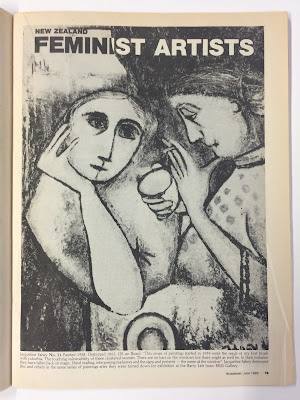 “This series of paintings started in 1959 were the result of my first brush with suburbia. The touching vulnerability of these cloistered women. There are no bars on the windows but there might as well be. In their isolation they have fallen back on magic. Hand reading, interpreting tea-leaves and the signs and portents – the omen at the window.” Jacqueline Fahey destroyed this and others in the same series of paintings after they were turned down for exhibition at the Barry Lett (now RKS) Gallery.

Posted by Courtney Johnston at 14:07