An enjoyable article by Joe Keohane for Slate, asking why pickpocketing is dying out in the States (and why culture at large holds a lingering admiration for this form of petty theft). 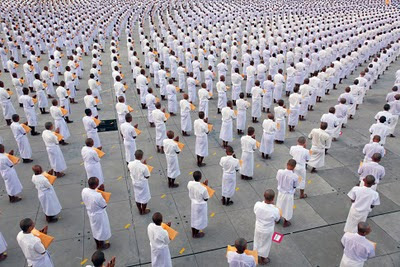 These photos strike me as teetering, Riefenstahl-esque, on the border of beautiful and creepy: a photodocumentary by Luke Duggleby Ron Gluckman in Foreign Policy about the Bangkok-based Dhammakaya movement.

One of the things that’s really taken off in the last 10-15 years: The public has a hunger to actually encounter the writers who are writing these pieces. One of the ways nonfiction writers are able to make money — not all nonfiction writers, but a fair number of them — is on the lecture tour. A kind of 19th century idea, the book as a loss leader for actually going out and encountering people.

You can check out more by Gerald Marzorati on the topic here.

Greater love hath no man than this, that he will set up a piss-take Twitter account: an Atlantic interview with the man behind Mayor Emanuel
Posted by Courtney Johnston at 09:00