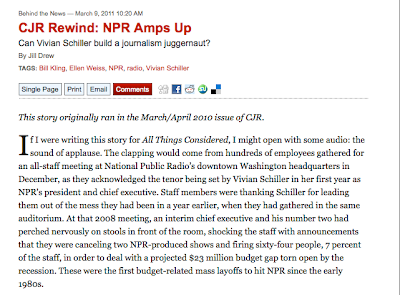 Over breakfast yesterday morning this article, about Vivian Schiller, the CEO of America's NPR, caught my eye in my feedreader. I skimmed over it, got excited about this section

Schiller’s style has succeeded somewhat in piercing NPR’s infamous bureaucracy. NPR correspondent Adam Davidson saw this firsthand when Schiller and he accomplished in one meeting what he had been unable to do for months inside the NPR management maze.

Davidson had participated in a rare NPR collaboration with a reporter from another public-media organization—Alex Blumberg of This American Life, which is produced by Chicago Public Radio and distributed by PRI—and the result had been a hit. “The Giant Pool of Money,” a masterfully clear and lively hour-long report on the causes of the housing crisis, aired in May 2008 on This American Life, the popular weekly show hosted by Ira Glass, and won an immediate outpouring of praise and several journalism awards. All Things Considered ran a shortened version of the story. Blumberg and Davidson proved radio could do long-form journalism about economics and finance that could excite and engage a broad, general audience. They wanted to keep doing it. But how?

Davidson and Blumberg came up with a concept for what they called Planet Money; it would be part blog, part podcast, part radio-reporting team. Davidson was NPR’s global economics correspondent but Blumberg, a producer for This American Life, didn’t work for NPR. And the multiplatform unit was neither a show, like All Things Considered or Morning Edition, nor was it a desk, like the business-news desk or the science desk. NPR is organized into shows and desks, apples and oranges. Planet Money was a kumquat.

and instapapered it for lunchtime reading.

Between getting to work and lunch, this article popped up in my feedreader .... 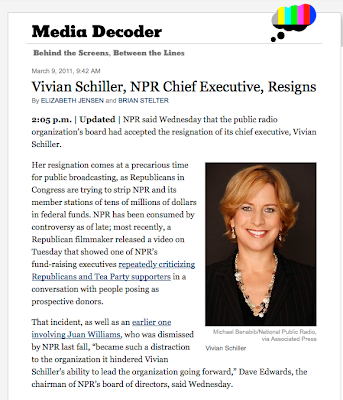 Gutted. Schiller - who, according to the first article, was doing some pretty amazing things at an institution that I admire and enjoy, has fallen on her sword after the top-flight fundraiser she brought in got taped criticising Republicans and Tea Partiers by people posing as potential donors (and, I suppose, Republican supporters). Impolitic at the best of times, and even more so when said party is trying to slash your budget.

That first article is well worth a read however: the challenges posed by a huge hide-bound institution that has a hundreds agitated stakeholders and a threatened budget, and the solutions Schiller found, are good lessons to all arts organisations right now.

Last night, I listened to a Slate Culture Gabfest, recorded on 9 March - so just before Schiller's resignation was announced. Farhad Manjoo was a guest on the show, talking about his recent piece in Slate on the complaint letters by NPR listeners. It's one of those classic American rants, but also an interesting insight into the audience growth and demographic for NPR - it's not what you might expect.
Posted by Courtney Johnston at 09:00