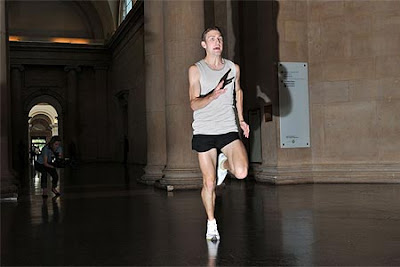 Martin Creed's new work for Tate Britain's Duveen Galleries - the latest in a series of sculpture commissions for the space - involves an athelete sprinting the length of the gallery every 30 seconds for the next four months.

The instructions to the volunteers taking part in No 850 are to "run as if their lives depended on it". The runners will have to negotiate visitors in the galleries, but visitors are not allowed to join in.

According to Charlotte Higgins in the Guardian, a person at the launch of the piece asked if it was pretentious. Creed replied: "No, it is not pretentious. No one is pretending." It reminded me of Rohan Weallan's reponse to a question from John Hurrell about the meaning of his work.

Image
Launch of Martin Creed's No 850 at the Tate. Image from the Guardian's photo gallery.
Posted by Courtney Johnston at 09:49