I didn't see a lot of art over the break, but I was very glad to catch Taryn Simon's 'An American Index of the Hidden and Unfamiliar' at the Govett-Brewster (it's on until 6 March - still time to plan a trip).

The photographs in the series document guarded materials and places (nuclear waste, cryo-preserved bodies, an avian quarantine) alongside some of those sideshow spectacles that seem to stand for America (an interbred white tiger in captivity, a Braille edition of Playboy).

Each photograph is accompanied by Simon's commentary, a short explanatory text. While it's a relief to be spared from convoluted curator-speak, and nice to be given an insight into just why an artist chose to seek out and document this exact thing, I do wish the texts had not be pasted up in 8pt font (although this matches the book and Simon's website). 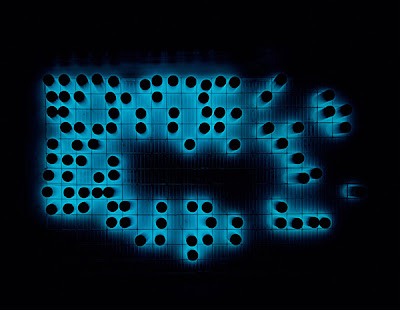 Submerged in a pool of water at Hanford Site are 1,936 stainless-steel nuclear-waste capsules containing cesium and strontium. Combined, they contain over 120 million curies of radioactivity. It is estimated to be the most curies under one roof in the United States. The blue glow is created by the Cherenkov Effect which describes the electromagnetic radiation emitted when a charged particle, giving off energy, moves faster than light through a transparent medium. The temperatures of the capsules are as high as 330 degrees Fahrenheit. The pool of water serves as a shield against radiation; a human standing one foot from an unshielded capsule would receive a lethal dose of radiation in less than 10 seconds. Hanford is among the most contaminated sites in the United States.

Big glossy photos of off-limits locations are nothing new or unusual. For me it's actually Simon's texts that set this series apart - her matter-of-fact approach, her willingness to engage with these people and places on their own terms, and not fetishise them.

We showed the Taryn Simon show at Christchurch Art Gallery Te Puna o Waiwhetu from 18 June last year. I think the Govett Brewster are the last NZ venue for this exhibition.