Goodbye to all that

So, today I leave my current job at Boost New Media and start my new job as Director of the Dowse art museum. And while I feel like Christmas has fallen out of the sky and landed on me, I’m still torn about leaving my team and some of our projects behind. It’s been two and a half of the proudest and happiest years of my life, and I’ve been so well cared for.

I’ve been musing about leaving ever since I started thinking about applying. And the more I’ve thought about it, the more I’ve realised that what I will miss most is being surrounded all day by people speaking a foreign language.

About two metres away from where I sat in the office are two pods of developers. And while I typed and talked and talked and typed and occasionally drew pictures with straight lines and grey boxes and blue text, I would overhear them murmur and sigh and laugh. Words – strange, marvelous words that ranged between the familiar and the incomprehensible – flowed between them, rose off them like mist and floated over to me. And I would pluck them out of the air and savour them.

When the stars aligned, I got to be part of project teams. This was when the language was at its best. I would go to stand-ups and sprint planning meetings, and delight in the words that tumbled from the devs’ mouths and flew about the room: filter factories, curl command, Monin, Munit, Pingdom, bootstrap …

I have come to picture these words in all sorts of ways. Sometimes they are rocks in a river that I balance on, jumping from one to another as a rush of information flows around me. Sometimes they are balls flying over my head, passed between the tall kids, which occasionally I get my fingertips on. Sometimes I think of them as small river pebbles, these well-worn objects that feel familiar until I pick them up, turn them in my hand, and realise they are little mysteries. There is a rhythm and pleasure to being surrounded by this talk that reminds me so strongly of being a gumbooted, Swandri-ed child, dreamily listening to farmers talk at the sales yards, swapping grazing numbers and eczema spore counts and milk solid prices.

I have also come to think of the words as seasons. The words come and go, in waves – every three months or so, one set seems to be replaced by another. Just when I was becoming fond of a word and would wait in meetings, ears pricked for someone to use it, ready for that little shimmer of recognition, it would leave us, and a new word take its place.

As I prepared to leave, I started collecting words – jotting them down, ticketing them away, eavesdropping on the online chat, pocketing post-it notes off the board when they were no longer needed. When I sat down to assemble them, I realised I had collected an alphabet:

N
New Relic
NoSQL (the saddest acronym in the world) 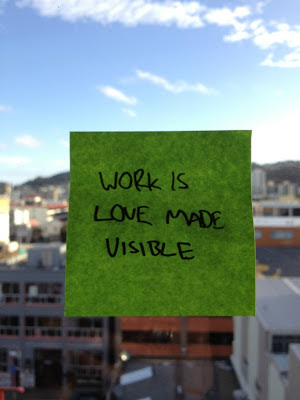 These are the words I take with me.
Posted by Courtney Johnston at 09:58