A Poem, Three Photographs, and Another Poem

[UPDATE: The full text of my talk is up now: Going back to gallery land]

Last week, I spoke at the National Digital Forum. My talk was about moving from the web world to the gallery world; about the metaphors I am taking from one environment to the other. It was also something of a call for more emotion and more connection in the way we make experiences around art and our other heritage collections, both physical and digital. (I was lucky enough to follow on from Sarah Barn's keynote; projects like Last Drinks and Unguarded Moments are such beautiful examples of this.)

I also talked about two ideas I have - one for a Museum of Emotions, one for Emophoto, an interface that allows us to take an image and attribute emotion to it. I plan to write these both up in more depth, hopefully before Christmas, and if not by then, then over the summer break.

Giving the talk made me nervous. The precis above might not suggest it, but it was significantly more personal and more difficult than almost any other public presentation I have given. I have only stood up once before and let more of myself show in front of people. Part of me wants to clean up and share my notes; part of me is reluctant to do this. While I was up on stage I had no idea whether people were coming with me on my journey or just thinking What on earth is she going on about? But the reaction of Twitter and the things people said to me later in the day made me realise that the silence in the room wasn't bewilderment or boredom; it was connection. It's this connection that makes me reluctant to share my notes, as I feel that connection was special and should perhaps be left in those moments in that room; be allowed to be a little ephemeral.

When I introduced the idea of the Museum of Emotions, I put up a slide with the opening lines from Charles Simic's poem 'William and Cynthia'. I read this poem a while before the notion of the Museum came to me, and re-read it after I had written up my first set of ideas and talked to some close friends about it. I didn't think of the poem between those two readings, but clearly it was moving around in my subconscious. Now, I come back to it every week or so:

Says she'll take him to the Museum
of Dead Ideas and Emotions.
Wonders that he hasn't been there yet.
Says it looks like a Federal courthouse
With its many steps and massive columns.

Apparently not many people go there
On such drizzly gray afternoons.
Says even she gets afraid
In the large exhibition halls
With monstrous ideas in glass cases,
Naked emotions on stone pedestals
In classically provocative poses.

Says she doesn't understand why he claims
All that reminds him of a country fair.
Admits there's a lot of old dust
And the daylight is the color of sepia,
Just like this picture postcard
With its two lovers chastely embracing
Against a painted cardboard sunset.

When talking about my idea for Emophoto, I referred to a DigitalNZ set I keep called 'You Move Me'. It's not a set I share, but one that I use to collect images for my own pleasure and sweet sadness, images that do just that ... move me. I talked about how the emotion I feel when looking at these images seems to transcend what they capture - it exists in the air between me and them. Here I will provide the transcript of my talk, and also show the images I chose not to put up on the screen, because I wanted ... well, I'm not sure what I wanted, but it felt right for the moment.

Some of the images in this set are easily parsed. Colin McCahon’s Scared, for example: the stark, brave statement in white paint flung against on a black background: I AM SCARED. I STAND UP. Ian Scott’s joyous, sexy, carefree Leapaway Girl. A photo from 1905 of three blind old men in matching beards, pipes and uniforms, sitting on a bench on the verandah of the Ranfurly Veteran’s Home. A man and a woman kissing at the Wellington Railway Station, watched by the partial profiles of two soldiers. Then there are the items that are less explicit.

There is a photo I feel great tenderness for. It’s by John Pascoe, and it’s from 1943. It shows Laurie Walker, the owner of Manuka Point Station in the South Island, standing in profile, head bent over his hands, reading a letter. Next to him stands his horse, also in profile, patiently waiting for him. It is so quietly reflective, so peaceful, so intimate, and when I look at it I hear the silence of my childhood, sitting in a paddock in the middle of nowhere, no-one else in sight, reading my book, waiting for my father to come back from wherever he’d gone and collect me. 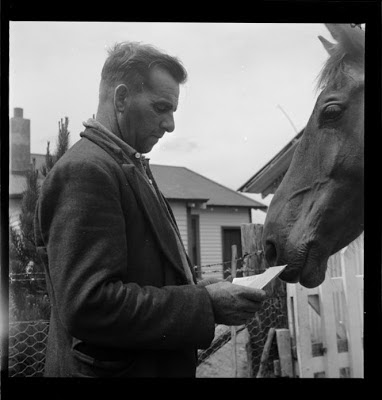 There’s an image that I find endlessly forlorn. It’s so bland, when you describe it: it’s a photograph, taken in about 1935, documenting a pothole on Molesworth Street. That's all. An empty section of street, the bottom part of a row of shops, and a pothole. But I feel such a wave of loneliness whenever I look at it. 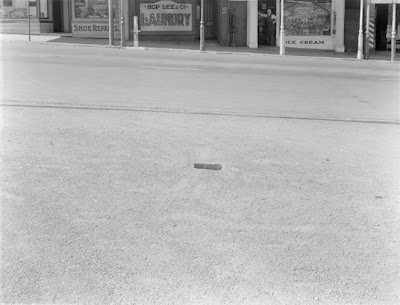 And there’s a 1950 photo from the Evening Post that I find incredibly romantic. It’s titled, simply, ‘Man and bird’. It shows a young man, his hair ruffled by the wind, wrapped in a trenchcoat, in Evans Bay here in Wellington. In the background, there is an overturned bicycle. And in his arms, he cradles a huge, powerful dark bird. 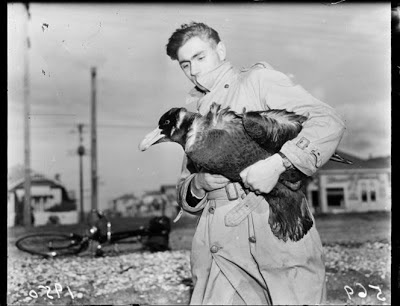 Every time I look at this photograph, I think of Richard Brautigan’s ‘The Castle of the Cormorants’. The poem goes like this:

Hamlet with
a cormorant
under his arm
married Ophelia.
She was still
wet from drowning.
She looked like
a white flower
that had been
left in the
rain too long.
I love you,
said Ophelia,
and I love
that dark
bird you
hold in
your arms.

At NDF this year, we had our first deaf attendee. As a result, we had a person signing in each session, interpreting the speaker's words. I was fascinated - I am alway fascinated - watching as words I know transform into gesture. So when I came to Richard Brautigan's poem, I relied on memory and turned away from the lectern, and watched the signer take the words and give them physical form. And it was one of the most beautiful things I have ever seen.

Thank you for this post—I had been very intrigued by the tweets coming out of NDF about your talk. I have been thinking a lot about evoking emotions and strengthening relationships with our visitors by enlivening the works and revealing their stories. We recently added some videos to a gallery with period music as a soundtrack—as the music plays the gallery has an entirely different feel. It’s not so dark; it wants to dance. Other videos play sharing the crackle of melting wax to mold a silver horse or the screech of a foot-powered saw slicing wood inlay layers.

I also like that you are echoing art forms off each other-such as the poems and the photographs.

Courtney, I heard your presentation at NDF and I have to write to tell you that I am completely EMO and constantly moved. From crying in a bus on my way home from work while reading Bryce Courtney 15 years ago to crying your Craig Arnold poem, I am inspired by your idea of connecting to things emotionally. Some of us just do it far more easily than others:) But, you did inspire me to go home and go back to writing some poetry of my own.

Liz - thank you. The NDF conference this year was amazing; you should come over next year :)

Sarah Barns spoke before me: her presentation hit so many of teh notes I was talking about in terms of making intelligent, thoughtful, meaningful, connect-able experiences around our history and our present.

Your music point is interesting too. Music has been integral to some of the most affecting works of art I've ever spent time with: Janet Cardiff's '40-Part Motet', Michael Parekowhai's 'On first looking into Chapman's Homer'. And I increasingly listen to music as I visit shows. I think the matching is hard to do well - and has to take all the different audience preferences into account - but I'm intrigued by your notes.

Michelle - thank you. I'm not completely EMO by nature, so this year has been something of a revelation. I'm so happy that what I said resonated with you in this way.