At the risk of sounding like a complete innocent, one of the things that surprised me in some of the larger American art museums was the display of entire rooms - like the 23 period rooms at Brooklyn Museum. I was also kind of gobsmacked by the Clowes Pavilion inside the IMA in Indianapolis (although I couldn't for the life of me at the time figure out what it was, and none of the floor staff could tell me) - and thrilled to see in the flesh Mark Dion's mythmaking around the period room idea at Mia.

It's not like I hadn't seen these kinds of full-scale installations before (in Philadelphia. for example - or even Michael Parekowhai in Brisbane). It was more travelling around the country and seeing this motif - which doesn't really appear so much in New Zealand art museums - being repeated in city after city. 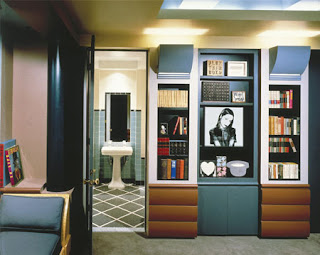 Which is a long way of saying that I do hope Brooklyn Museum puts this postmodern room by Michael Graves on display sometime.
Posted by Courtney Johnston at 06:30