Not your grandparents' museum

I went on a bit of a Twitter rant yesterday, spurred by two articles that turned up in my timeline in the morning:

A Look at the Museum of the Future - Wall Street Journal

[Rick] Ellis has just returned from China, where he visited the sparkly new Shanghai Natural History Museum, which opened in April. He's still fizzing with excitement at the museum's marriage of the digital and physical worlds, the way they use technology to bring historical objects to life. (DomPost)

While aimed at boosting crowds, the new technology could blur the lines between education and entertainment. As institutions focus on the thrill of new displays, some observers caution that the art and artifacts could get lost in the commotion. “It’s important that museums be responsive to audiences, but it can tip easily into making it all about the audience and maybe not pushing the audience into something outside their own experiences,” said Elizabeth Rodini, director of the museums and society program at Johns Hopkins University. (WSJ) (My emphasis)

When Ellis was appointed, Te Papa chairman Evan Williams hailed his extensive experience in digital media. It's no surprise, then, that Ellis's vision for the museum's future comes with a virtual reality filter.

The tech-centric plans will reignite the debate that has simmered since Te Papa's opening in 1998, about what a national museum should be and the fraught line between education and entertainment. (DomPost) (My emphasis)

“When we talk to museum guys, they’re very serious, they say, ‘We don’t want that goofy theme-park stuff,’” said Adam Bezark, creative director at the Bezark Company, a Los Angeles design firm. “And so we say, ‘OK, we’ll bring in our serious people.’ And it’s all the same people. A great designer is a great designer.” (WSJ)

But statements such as "Te Papa will be making learning an entertaining and playful experience" alarm museum traditionalists who argue Te Papa is already a dumbed-down, Disney-fication that obscures the magic of the objects themselves.

The Smithsonian magazine neatly summed up the competing values when it called the new Shanghai Natural History Museum "not your grandparents' museum". (DomPost)

The slant of each article suggests a tension between experts and existing visitors, who have influenced and enjoyed the "traditional" museum, and non-experts and potential visitors, who - as Rick Ellis puts it talking about the (disputed) "digital native generation" -  "see museums as boring and old".

And they made me ask a bunch of pissed-off questions. Like - do teachers angst about becoming "too entertaining"? Whose grandparents are we talking about here - a 2 year-old's? A 70 year-old's? Do we want to preserve or return to the museum of the 1960s, 1940s, 1880s? What about the huge chunk of visitors I see in the museum every day, grandparents & retired caregivers with pre-school children? How do they fit into your "digital native" generation?

In her talk at MuseumNext in Indianapolis (notes here, video here) Nina Simon of the Santa Cruz Museum of Art and History talked about coming to the museum three years ago, when it was financially broken and had an annual visitation of 17,000 people (in a city of ~63,000 and a county of ~270,000). Nina talked about completely overhauling programming at the museum, to achieve their goals of reaching an audience that mirrors the demographics of the city, and creating opportunities for social bridging.

In her time at the museum, Nina has been accused of dumbing down standards and shows (see this WSJ article for example, probably not coincidentally by the same writer as the article above). Her response is to frame what she is doing as 'opening up', not 'watering down'.  And she also said something I found really interesting.

The existing supporters of the museum were "karmically distressed" by the new events and exhibitions happening at the museum that weren't for them. Previously, everything was for them. Now, there are elements of the programme that aren't for them. In comparison, new visitors (62,000 last year) don't complain about or feel excluded by events taking place that they are not interested in. (Or, as either Nina said or I wrote down in response, they don't feel confident saying this, or aren't able to articulate this.)

All of this made me write this 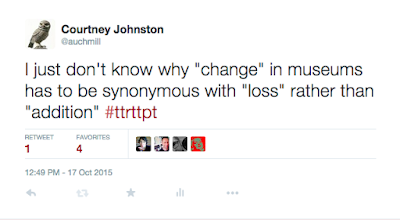 I know very few evil museum professionals. Most people aren't setting out to make museums stupid, shallow, or sell-outs. As a public service, we need to innovate, to change, to lead, to respond, to adapt and to hold true. If we are punished for changing, we will become "your grandparents' museum", if by that you mean places that don't hold meaning today and tomorrow.

Posted by Courtney Johnston at 10:31

Thanks for this great post and for your kind words, Courtney.

Today, I was reading this article about change in VFW posts (community centers for veterans of foreign wars) in the US to make them more relevant to younger veterans. Change all the instances of "post" to "museum" and you have a very similar case story of change.

At the end of the article, a 94 year old veteran says, "Life is changes. It's good for you."

His quote made me wonder: what is the psychology of peoples' reactions to change? Are some people naturally more change-averse than others? Does fear of change really correlate with age, as is often suspected, or is that a fiction?

I'm curious what we can learn more globally about these questions.

I've thought hard about your talk since Indianapolis, and this idea that 'change' is equal with 'loss' has been rattling around in my head a lot.

That article is fascinating - a great example of an organisation realising that the needs (and tastes) of the people it exists to serve have changed and they need to adapt if they wish to be of service.

And your question about age and change is intriguing. The biggest change in my life time is probably the internet (this is until we face up to climate change, anyway). I haven't had to adapt to the increasingly active role of women in society; to the fear and danger of the Cold War and the global changes after it ended; the civil rights movement; a world war. Do you use up all your change capital as the years pass? Or do you work up some change resilience? Or do we all have a tolerance level that is set when we're born, and circumstance dictates whether we turn that up or down ...?