In the second-to-most-recent episode of 'Empire', Lucious Lyon leads a pop star's minder/agent out of his living room (creating time for the star to get to know his R&B starlet son better) by uttering the immortal line "Would you like to see my new Mickalene Thomas?".

The use of visual art in the world-building of Empire is one of the show's main appeals for me. Art often features as a metaphorical element in tv and movies, but never have I seen it used so consistently and with such a sense of political statement.

Apart from a key Klimt in an early scene in Season One (which Cookie writes off as ugly), a hazy Monet in the Empire offices and a portentous copy of van Gogh's Skull of a Skeleton with Burning Cigarette used to underline a twist in Lucious's story arc, most of the artists are contemporary black Americans, from Kara Walker to Jean-Michel Basquiat, to prominent and repeated use of Kehinde Wiley, to younger and newer artists like Ebony G. Patterson.

I'm far from being the only person fascinated by it. This New Yorker article by Antwaun Sargent describes how Lee Daniels, the show's creator, works with set decorator Caroline Perzan and galleries, museums and artists to select and secure the work for the show:


“We choose pieces that match the taste of the Lyons and the world they live in—sometimes it’s over the top, but most times it’s classy and my definition of ghetto fabulous,” Daniels told me. His view seems to reflect a yearning to open the artworks up to an entirely new language for interpretation. For example, Wiley’s 2007 oil-on-canvas painting “Officer of the Hussars,” which hangs in the Detroit Institute of Arts, shows a young male straddling a horse, with a sword in hand. The painting plays with the aesthetics of race, power, and masculinity, as does much of Wiley’s work. Hakeem Lyon  is the youngest member of the family, and one plot line follows his attempts to be more than just a rapper; the “Hussars” replica hangs in Hakeem’s living room.

In this video interview for Time, Wiley describes how Daniels approached him to have his work reproduced on the show: "He didn’t know if it was going to be the biggest car wreck or the biggest success," Wiley said. "And I said, 'Sure.'" 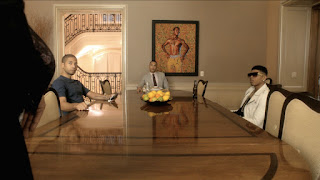 Earlier this year though Hyperallergic gave the best breakdown of how art is used on the show, in an article by John Sherman titled 'How the Identity Politics of ‘Empire’ Play Out on Its Walls':


Not 10 minutes into the pilot episode of Fox’s TV drama Empire, Kehinde Wiley’s bright yellow portrait “Prince Albert, Prince Consort of Queen Victoria” looms into view above the dining room table where the men of the Lyon family are gathered: Lucious Lyon and his three sons, Andre, Jamal, and Hakeem, the scions of Empire Records. The portrait’s subject, a young Jamaican man, appears like a fourth son, looking on attentively from his frame, a prince among princes.

And it includes a point that totally escaped me at the time:


In contrast, Andre, Lucious’s eldest son, lives with his blonde, white wife in a townhouse full of dull landscape paintings and a color palette that runs from eggshell to ecru. Andre Lyon is an outsider within the family, having finished an Ivy League MBA instead of a chart-topping album. In their first meeting after Cookie’s release from prison, she asks Andre frankly, “Why’d you marry that white girl?” The spaces he occupies are cold and dull, with none of the color of Wiley or Savoie, further distancing him from the rest of his family.

Andre and Rhonda (the 'blonde, white wife') have, of course, just moved into a new mansion on Long Island, bought for them by Lucious, who is overwhelmed by the fact they are about to produce his first grandchild (still surprised that pregnancy hasn't turned out to be faked, personally). Now that Andre has found both God and his way back into the Lyon pride, will his art take a step upwards too?