I should just stop following links through to Judith Dobrzynski's blog on the ArtJournal platform, because they almost inevitably leave me feeling scratchy and combative. There's a mendacious 'gotcha!' tone to many of her posts, an in-the-know way of writing that I often find mean-spirited.

But this post lambasting the labels in the touring Heatherwick Studios exhibition currently on show at the Cooper Hewitt annoyed me so much I felt I needed to write something. Here's what Dobrzynski had to say:


There’s little questions that some museums have dumbed down their labels of late. Granted, people seem to know less and less about art, even as museum attendance seems to be growing. (That may be because there’s so much more to know and to learn about art, what with more museums showing increasingly broad and diverse offerings). For prime evidence of the dumbing down, though, look no further than the Copper Hewitt Museum in Manhattan. I was there a week ago to view Provocations: The Architecture and Design of Heatherwick Studio. Heatherwick’s work is original, innovative and fascinating. But neither the show nor the labels do him justice.

We’ll stick to the labels here, which are framed as questions. Probably meant to be engaging, to involve viewers, they instead are condescending. The museum feels like a kindergarten.

Now, there's a point here that I agree with. As the offer and the audience at art museums gets broader and broader (and contemporary art continues to become less and less figurative, and an audience's familiarity with Western religious stories, literature and classical subjects can be less and less taken for granted) it *is* becoming harder to write labels that will offer something of value to every visitor. This is why we see museums offering layers of interpretation, often through digital supplements, to try to offer an entry point to an unfamiliar visitor and a new idea to a familiar one.

But I saw Provocations earlier this year, and was actually delighted by the labels. I thought they did a marvellous job of demonstrating to a lay audience how the studio approaches a project - and what makes them unique. Each label starts with the central design problem, posed as a question, and then explicates what the studio settled on as a solution or answer. They captured the playful spirit of the studio's work, and the sense of social engagement I saw in the images and maquettes.

In fact, I thought the labels were so good that I took shitty memory-jogging photos of them: 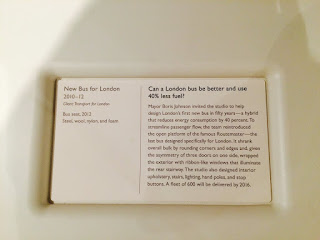 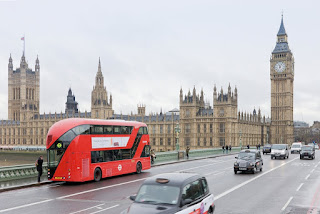 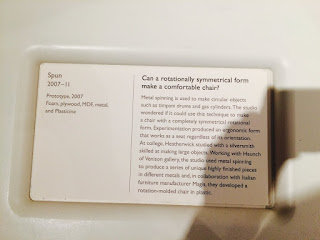 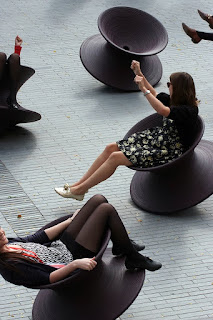 And here's the text for the Zip Bag:

How can you make objects out of long pieces of zipper?

Discovering as a student that it was possible to buy a 656-foot-long roll of continuous zipper, Heatherwick began researching ways to use this material to make three-dimensional objects. The studio produced various bags, vessels, and even a dress before approaching Longchamp, the French handbag company, about collaborating. The resulting design incorporates strips of fabric between the toothed edges of the zipper so that the bag could double its size when unzipped. The Longchamp Zip Bag, which began as an experiment in 1993, was retailed worldwide in 2004 and became a bestseller.

You can see for yourself though, as the Cooper Hewitt has posted all the projects with all their labels online.

Design and architecture shows are the genre of museum display that I struggle most with - the Gehry exhibition I saw at LACMA, for example, was just a sea of plywood and different shades cardboard, which was exhausting on the eyes and hard to imagine as shapes in space. The Heatherwick exhibition in contrast was a joy, from the interactive project at the start that let you print out pieces of tickertape to carry around with you, to the cunning modular display that makes it a good touring show (curated by Cooper Hewitt's Brooke Hodge, the exhibition was organised by the Nasher Sculpture Center and also showed at the Hammer Museum in LA).

In contrast to the Heatherwick labels (condescending to the point of insulting, Dobrzynski concludes) she approvingly cites a 2010 newspaper interview with John Baldessari:

“I don’t think you really have to spoon feed the viewer,” he explained. “You just have to give them something to hang on to and they can begin to unravel it themselves. It’s kind of like reading a detective story, you get a clue, you follow that.”

And I honestly can't see where she finds the distance between that commonplace idea and the Heatherwick labels.
Posted by Courtney Johnston at 06:30