The title of this post is taken from a recent talk by Mia Ridge, Network visualisations and the ‘so what?’ problem. In the talk Mia (who is a digital curator in the British Library working mostly with pre-1900 archives but also a long time proponent of better uses of the web to get people using and understanding the holdings of cultural organisations) addresses some of the things that really concern me about the use of visualisations and interactives in the cultural sector: specifically, the question ‘What does this tell me that I couldn’t learn as quickly from a sentence, list or table?’.

That is my question with so many of the visualisations I see, especially the network ones, which seek to show you links between people, objects, places, dates, all of these things, some of these things, and/or other things.

A recent example that floated across my feeds is this visualisation of Miles Davis's legacy, as represented through mentions of him in various contexts on Wikipedia pages (from artistic collaborators to 'drug users'). 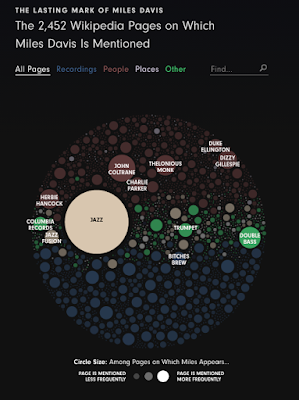 It's a truly beautiful thing, and it certainly has the "spronginess" that Mia mentions as one of the appeals of visualisations like this. 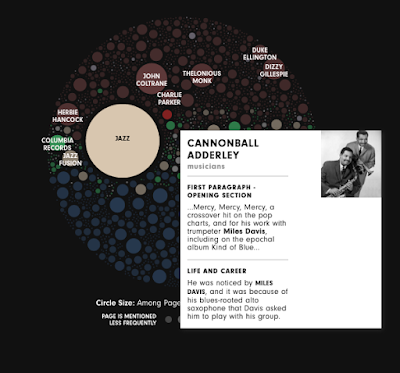 But I still don't feel like I get a lot more from it than I do from the sub-1000 word write-up, and while pop-up boxes and swirling colours indicate connections and sites of information to me, I don't feel better informed than I do by a similar paragraph.

One of Mia's most salient points, to my mind, is this:

Sometimes a network visualisation isn’t the answer … even if it was part of the question.

I've been pondering visualisations as a small part of a much bigger question (well, bigger for me, currently): how do you give a visitor to an art exhibition the context and detailed info that will open up the work to them? I think about this all the time - it's my job - but I've also been thinking about it a lot since visiting Space to Dream at Auckland Art Gallery, which exposed how superficial my knowledge of South America is. How could I have gleaned the information I needed about relationships between countries, about political movements and protest, about art and culture, that I needed to get the most out of the opportunity to see all those works brought together?

In light of this, I was intrigued by Jarrett Fuller's A Rough Sketch for a Video Essay as Design Criticism, recently sent to me by a friend. Fuller - using the Eames' films, and Orson Welles' last film, F for Fake - asks whether video, rather than writing or graphic design, is the best medium for describing and critiquing design for an audience.


A Rough Sketch for a Video Essay as Design Criticism from jarrett on Vimeo.

I'm not exactly sure what separates the video essay, as Fuller details it here, from a short documentary., except the intent: which is much the same, I suppose as saying that what separates the curator's wall panel from the reviewer's column is intent.

We all tend to use the tools we're most skilled at and excited by to express our ideas - writers with words rather than pixels, for example, a data visualiser with graphics rather than sentences. This points to an exciting future however where more curators may come from a design background (or schooling where basic design and coding is built in) and we can more easily find ways of inducting audiences into art than the current mis-match of text panels to artworks allows ....
Posted by Courtney Johnston at 06:30