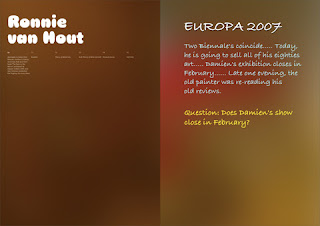 Gwynneth Porter and Warren Olds (of Clouds) have apparently taken Over the net to task for daring to suggest that the Venice un-publication might use Helvetica.

To my mind, Helvetica is one of typeface's silver foxes (alongside Gill Sans). The Swiss font is 50 this year, and still proudly utilised by brands ranging from Gap to Tupperware. MoMA saw fit to throw it an exhibition to mark its half-century (Helvetica, by the by, was the first typeface the Museum acquired). These people baked it a birthday cake. Lars Muller's written a book about it (he calls it the 'perfume of the city'). Gary Hustwit made a film.

Designer joke: Two fonts walk into the bar and the barman says "sorry lads, we don't serve your type".
Posted by Courtney Johnston at 15:09