A painting by Mark Rothko hanging in the Tate - confirmed by a Tate spokesperson as one of the Seagram murals, and identified by Hyperallergic as Black on Maroon (1958) - has just been vandalised, with a visitor writing a short message in black ink or paint in the work's lower right corner.

This is awful, of course. Awful. But what fascinates me is that the first reporting and analysis is happening through Twitter and blogs. A visitor tweeted a picture from the gallery after watching the tagging: 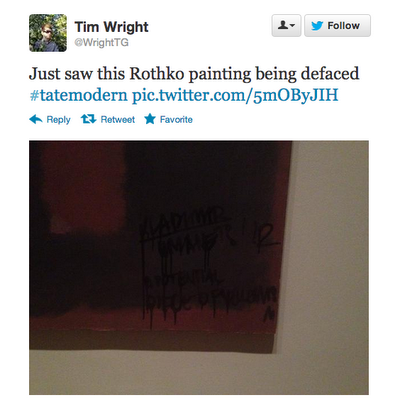 The photo of the tag is now the image for the second result when I google 'Rothko Tate': 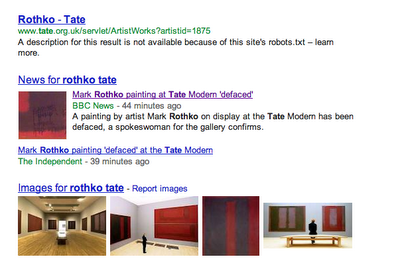 The Hyperallergic blog has been collecting and updating material and messages, including Greg Allen's identification of the work and proposed suspect, providing a far fuller picture than official reports. As another person on Twitter observed: 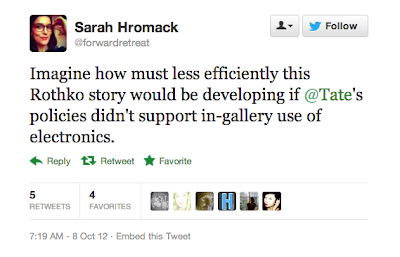 This is kind of amazing to me. There is utterly no way for the Tate to 'manage' this story (and as of right now, no-one is updating their Twitter account with details). It's happening in real life and real time. There's no chance for emergency meetings and agreeing on a message - pretty much everything that's there to be known is known and already public.

Another aspect of this that interests me is the long term implications. When this incident enters the long, long history of defaced artworks in public galleries, it will come with a flood of documentation; eye witness accounts, immediate and more considered reports, analysis and speculation - perhaps even statements from the perp. A history of this act of vandalism could start being written tonight (a day is a loooooooong time on Twitter).

None of this academic interest lessens the sense of grief I felt when I saw that scrawled message though. It's such a shitty and senseless thing to do. And as Hari Kunzru pointed out: 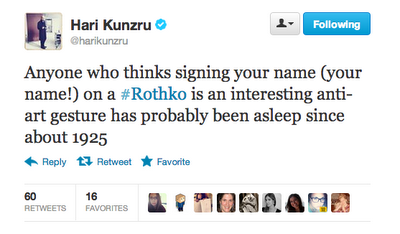 Posted by Courtney Johnston at 08:19

It's more than just a 'tag'. The 'name' is an anagram of "I'm true vandalism" and the 'message' is about yellowism. http://www.thisisyellowism.com/ So it is an art/anti art comment, not just a senseless tag. I sense it'll spark debate.....

It might spark debate about Yellowism, if yellowism wasn't so fucking boring. Trying to make a quick buck off recapitulating Duchamp on your shitty sub-tumblr blog isn't revolutionary or clever. It's tedious.