Make sure you drop by Hamish McKay's new space on Ghuznee Street before September 8, to see the current show 'Milan Mrkusich: Four Paintings'. 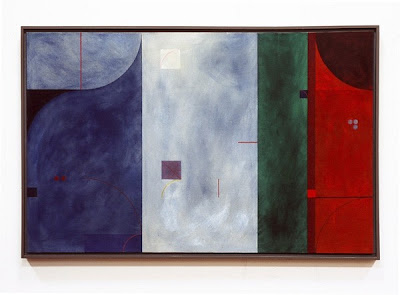 With just four paintings (spanning 40 years), Hamish has magicked up an overview of Mrkusich's work. There's the brushy Painting No 7 (1960), and elegant 'Segmented Arc' from 1982, the recent Painting III Red (2000) and the somewhat odd but also quite entrancing Four Zones (1966), shown above.

Don't forget the office space, where there are further smaller works, including a very beautiful diptych in white, black and blue - my personal favourite.

Meanwhile, the 'miss' of a weekend's gallery-going was City Gallery Wellington's current array of shows. A more generous person might call this 'something for everyone' programming - I'm going to go with 'inchoate'.

Wait instead for the next season (starting 17 November), and two big touring exhibitions: 'Reboot', from the Dunedin Public Art Gallery, and the Bill Hammond survey 'Jingle Jangle Morning' from Christchurch Art Gallery.