Daddy, can I have a Jeff Koons?

This article in the Wall Street Journal just blew me away.

It investigates the American trend of wealthy parents helping their kids set up their own collections. For example this Roman bust .... 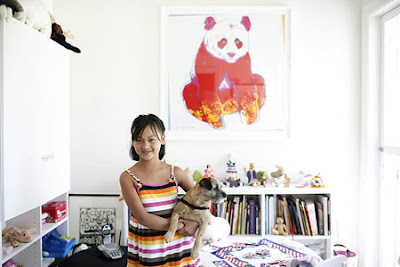 I don't even know where to start with quoting from the article. Maybe here

[Shammiel] also leverages her kid appeal when negotiating deals. At last year's Scope art fair in the Hamptons, she spent three days haggling with dealer Don Carroll before he agreed to knock about $200 off a $3,200 plastic sculpture by Nao Matsumoto of a block of cheese topped by two toy soldiers. Mr. Carroll says that bargaining with Shammiel, then 9, was "pretty awkward at first -- I mean, she's just a little girl," but eventually he relented. "On the last day, she came up and said, 'I'm really scared, but Daddy told me I have to negotiate,'" Mr. Carroll says. "I told her she was already doing a good job."

Other kids receive art allowances -- a $5,000 cap per piece is typical -- or buy art with their birthday, bar mitzvah or even tooth-fairy money.

"Vanity does come into it," says New York real-estate developer Aby Rosen, whose sons are collectors. "People never used to show off their boats and cars and houses and art, but now we can, and that's great. It's nice to show off that my son likes art."

Yet I'm intrigued by Peter Brandt's method of teaching his 9 kids to appreciate art:

He held up flashcards of famous works and promised $1 to the child who could identify the artist.

Posted by Courtney Johnston at 15:56