People who know me very well (and certain people on Twitter) know that I have something of an obsession with perfume. Which led me one night last week to wind up at a perfume masterclass at World, being run by the rep for some of the perfume brands World Beauty stocks, including Juliette Has A Gun, Creed, the new-to-store L'Artisan Parfumeur (go on, die a little with me knowing that these fragrances are now stocked in Wellington), and Lubin.

It was, as I fully hoped and expected it would be, both patently ridiculous and wonderful. (I wouldn't call these things poles - I would say they are wrapped around each other like red and white in a candy cane. The conversation veered from an older woman noting that if you're expecting to get lucky, perfuming yourself near your ladybits makes a lot of sense, through to a cleancut young man who explained the molecular structure of aldehydes.) 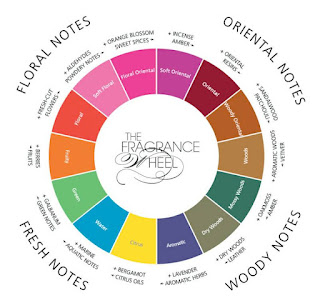 The evening had a very sensible structure. Using Michael Edwards' fragrance wheel, Lucy took us through 14 perfumes to match each of the categories (a couple with A and B scents). We started off with the florals, and I was predictably not very excited (I don't own anything that could be categorised as floral) until we got into the orientals - at which point I started to fall in love.

I have tried Lubin's Idole before - the only reason I haven't taken it home already is that it sits so firmly between the two perfumes I already wear most frequently at night, Guerlain's Shalimar and Frapin's Terres de Sarment. Idole got everyone in the room going, but it was the next perfume that blew me away.

I've been wanting an oud for a while (oud or aoud or oudh or agarwood is a resinous heartwood that forms in certain evergreen South East Asian trees when they are infected with a kind of mold). I have a sample of Montale's Oud Cuir d'Arabie, which wraps leather around this dark, resinous note, but I haven't figured out how to get my hands on a bottle of that yet. What I have managed to snag though is one of the six bottles of Midnight Oud by Romano Ricci for Juliette Has A Gun that have been brought into New Zealand, which was the stand-out for me of the evening. 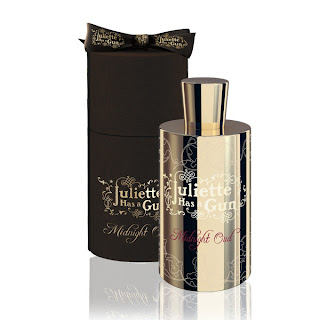 This isn't just my first oud - it's also my first rose. (I have my eye on Guerlain's Nahema, but not until I'm a frightening old lady). I have the heavy bottle next to me as I write this, and I keep easing off the lid and taking another deep breath. The warm, milky scent of the saffron in the top notes plays off against the clean yet heady rose, which veers into geranium, and underlying it all is the darkly transparent note of the oud. It is divine.

I wore this for the first time on Friday, and I could still smell it in the crook of my elbows when I woke up the next morning. I attribute this to three things:


The other perfume that was an unexpected hit with me was Creed's Taberome. (Luca Turin is so sniffy about Creed that I've never bothered to try them). Taberome is a completely delicious, if very pricey, aromatic/citrus - a beautiful bright cologne with some smoky depths that made me wish I had someone young, male and impressionable whose life I could change by giving him a bottle.

A sidenote. I am bemused that more men don't wear cologne (or even more adventurous perfumes). I met a man at the evening who has 50 or 60 perfumes and - asides from being immaculately groomed, successful, and very personable - he seemed pretty normal. If you're sitting there now feeling like you're letting the side down, here are a few to try:


(In case you're wondering, I just did a bottle count. A few months ago I threw out some perfumes I no longer wear. Now I'm down to - or up to - nine, three or four of which I wear with regularity, the others of which I pull out when the mood strikes me. I'm not anywhere near reaching the level of the lady I meet last week who has a purpose-built cupboard for her collection. But I thought she was fabulous.)
Posted by Courtney Johnston at 07:30

Nice to know the Cool Water I currently wear meets your approval. Though I fail on the second criteria there.