I've written before about Good, Form and Spectacle's indie collection discovery websites. This week they released a new 'spelunker', focused on a tiny subset of the British Museum's collection, the Waddesdon Bequest.

With under 300 objects, which are a mix of medieval and Renaissance objects and 19th century fakes, it's a delightfully contained experience. Aesthetically, it's really enjoyable to see black used as the background colour (most of the objects have been photographed against a black or very dark graduated background). 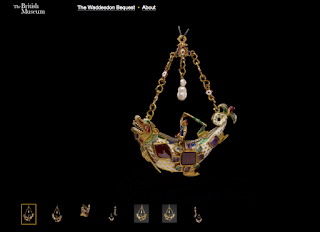 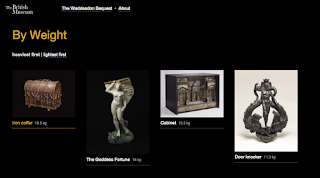 You can browse by maker, material, weight (weight! I've wanted this for ages), date, and many other facets. With such a small number of objects, the real beauty is in the way you begin to build connections between objects you see frequently, seeing them linked by the hand of a maker, their materiality, their age, or their subject matter. Groupings appear and disappear, with you developing a more rounded understanding of the pieces along the way. 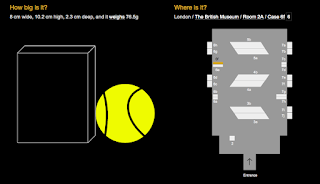 They've also used their code to show size comparisons, based on the international language of the tennis ball. Beside that is a nifty interactive that lets you explore by physical location in the gallery - which would lend itself really well to use inside the building as well as online.

My favourite of these sites so far. Bravo.

Posted by Courtney Johnston at 08:00