One of the things I was most excited to try on my research trip to the States was the Brooklyn Museum's Ask app, their flagship digital product designed to encourage deeper looking and questioning from their visitors while they are in the museum. (Read about the ongoing development of Ask; see my MWA and NDF talk notes on using the Ask app.)

I thought the Ask app would be hard to use, because I'm often a fairly incurious visitor. I either know what I'm looking at, and am therefore processing my take on it (as a result of years of reviewing), or - if I'm not familiar with what I'm seeing - I'll read the labels and, if they're insufficient, I'll get interested instead of the professional problem of interpretation rather than questions about the objects. At first with the Ask app I had to push myself to find questions to ask the support team through the app that weren't already answered by the information presented in the display or by my own general knowledge. 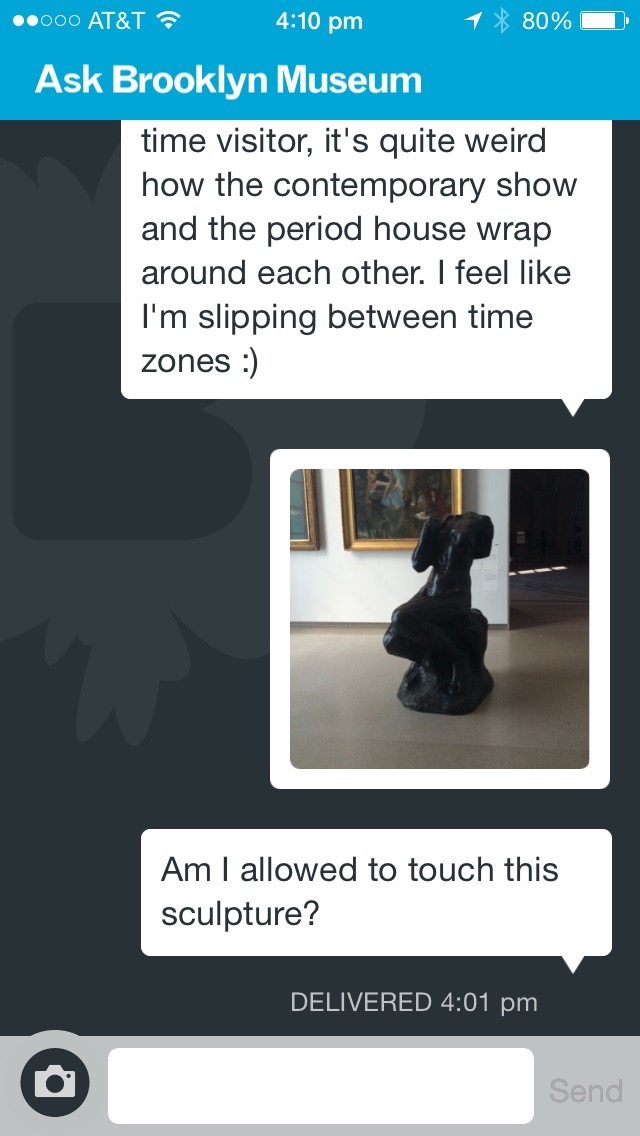 Once I got into the swing of it though it I was surprised by how quickly I struck up what felt like a rapport with the person on the other end of the app. I started submitting observations rather than questions. I wanted to develop - not exactly a friendship, exactly, but a connection that would make the unidentifiable person on the other end of the phone feel like I was more than just some normal visitor.

I knew quite a lot about the app going in, so I was always aware the a real live person - well versed in the Museum's collection and with access to a growing database of answers to queries from visitors just like me - was on the other end.  However I've heard or read (but can't source it at the moment) that it has taken many people three or four exchanges to figure out it's a real person on the end of the line (the growing opposite of many online help services and corporate accounts, which are increasingly automated).

So this was the kind of stuff floating around in my head when I settled into my wait at the airport in Indianapolis with the NYT magazine and its lead article 'Barbie Wants to Get to Know Your Child', in which James Vhalos observed user testing sessions for Mattel's latest product, 'Hello Barbie'. 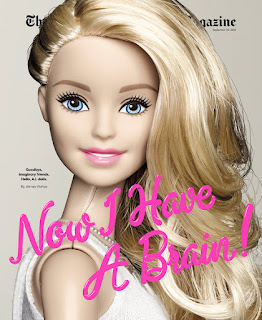 The toy has just been released for pre-sale. From the product info:

It's a whole new way to interact with Barbie®.

She's ready to discuss anything in an outfit that blends trendy and techie for a cool look.

Use is simple after set up -- push the doll's belt buckle to start a conversation, and release to hear her respond.

Just like a real friend, Hello Barbie™ doll listens and remembers the user's likes and dislikes, giving everyone their own unique experience.


Hello Barbie is by far the most advanced to date in a new generation of A.I. toys whose makers share the aspiration of Geppetto: to persuade children that their toys are alive — or, at any rate, are something more than inanimate. At Ariana’s product-testing session, which took place in May at Mattel’s Imagination Center in El Segundo, Calif., near Los Angeles, Barbie asked her whether she would like to do randomly selected jobs, like being a scuba instructor or a hot-air-balloon pilot. Then they played a goofy chef game, in which Ariana told a mixed-up Barbie which ingredients went with which recipes — pepperoni with the pizza, marshmallows with the s’mores. "It’s really fun to cook with you," Ariana said.

At one point, Barbie’s voice got serious. ‘‘I was wondering if I could get your advice on something,’’ Barbie asked. The doll explained that she and her friend Teresa had argued and weren’t speaking. ‘‘I really miss her, but I don’t know what to say to her now,’’ Barbie said. ‘‘What should I do?’’

"You’re right. I should apologize," Barbie said. "I’m not mad anymore. I just want to be friends again."

I was so struck by this interchange. This wasn't just canned dialogue about favourite colours or girl power platitudes. This was a serious conversation about how people should treat one another, with the child being asked to give an adult advice. (Do kids still see their Barbies as adult stand-ins, rather than peers? I certainly did. After all, Barbie has an adult body, a job, and an income that gives her consumer power.)

Toys are being launched that let kids build authentic relationships with an AI-driven personality. Robot tours of museums are already an accepted thing. Apps are being designed to give solo visitors a friend on the other end of the line. How long until Museum Docent Barbie is launched for your kids' visit needs?

(You can also, if you like, start to freak out about this newer, more powerful version of the nanny-cam, a toy that collects and parses the conversations your child thinks are between her and her friend.)