The Cooper Hewitt has just released a new feature on its collection site - a timeline of significant dates in an object's history (when it was made, acquired, exhibited and digitised).

The new feature was inspired by the timeline used by the New York Public Library (scroll to the bottom of the page), but differs in two ways.

First, they use different metadata. NYPL shows the birth and death dates of the maker, along with the creation and digitisation dates for the object. Cooper Hewitt doesn't have the maker info (as far as I can tell) but includes exhibition data and more finely differentiates the method of acquisition (donation, bequest, purchase). 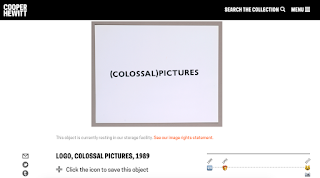 Second, instead of a legend, Cooper Hewitt is (characteristically) using emoji to convey the timeline events. 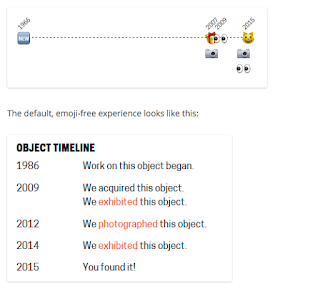 The screenshot above shows the emoji version of the timeline and a plain text equivalent for accessibility purposes. As Sam Brenner writes in a blog post about the new timeline


The thought process for the second issue (use of color) went like this:

Color will be useless so we will have to use shapes as well. But then we’ll need a legend because color or shape don’t have anything to do with timeline events like “date created” or “date exhibited.” But legends are a bummer — so old media! Maybe we could use symbols instead? Maybe we could use EMOJI?!?!?

Beyond the fact that their symbolic nature transcends the “map a color to an idea” style of legend, emojis further a second goal that we have with the collections site, which is to “avoid feeling like a database.” They allow for novelty, comfort and humor to be injected into the digital world as quickly as typing a letter on a keyboard.

I am an old person and so I prefer the text version (though once I figure all the emoji out I do see that I'll be able to scan a timeline with much more rapid understanding than the coloured diamonds of NYPL). Over all, as with the Date Graph on the V&A Spelunker, I'm enjoying the new ways that are seeping through for museums to show something of the life stories of their collections online.