Sometimes a little idea brings a lot of pleasure. An example of this, which has been around since 2014 but only just passed my transom today, is Sup Bowie, a site that answers the vital question: What did David Bowie do at your age?

It does what it says on the box: you enter your name, and it shows you an event from Bowie's life. 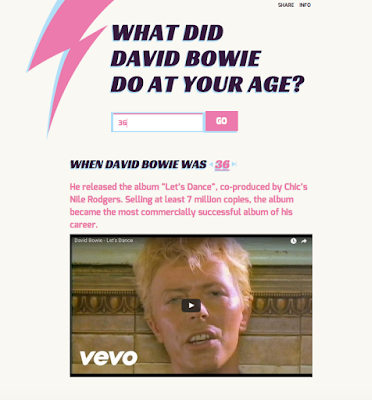 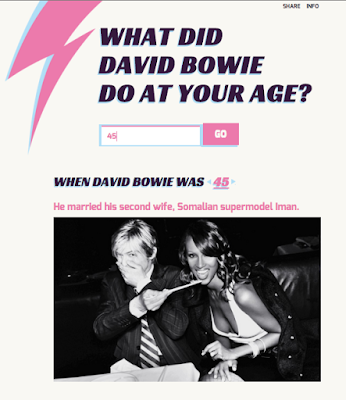 My first thought was, of course, that this would be fun to apply to a New Zealand artist who worked steadily and productively across their lifetime - Colin McCahon, with the added advantage of the McCahon database, is the obvious option. In his 36th (approximately) year, for example, McCahon was living in Titirangi, experimenting with a new visual landscape in a Cubist-influenced style, doing some stage designs for the art gallery ballet, and producing a few rather theatrical early word paintings, like  Sacred to the memory of Death. 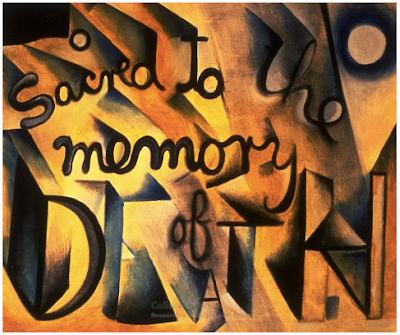 I thought this idea could be extrapolated out: for example, a collection search could let you call up works by various artists, based on their age (Show me all the things made by artists when they were 36). Mulling this over though, I realised this was kind of dry (and totally the kind of thing people like me come up with and get all excited about).

A creative director or UX lead might explain that the appeal of Sup Bowie is getting to use a very basic shared attribute (we were all born in some year, we were all born in some place, we are all a certain age) to draw a connection yourself and the content being delivered/marketed to you. The appeal with the Bowie site, of course, is being able to compare your life progress with a mythical unicorn beast. The reason I *like* Sup Bowie though is that instead of being programmatically driven off, say, his Wikipedia discography, each year has been specifically scripted. While some years are marked by showstoppers (his marriage to Iman, the release of Let's Dance) his childhood years are marked with imaginatively captioned photos and some years (possibly the less active, to be fair) are given to basically random shit 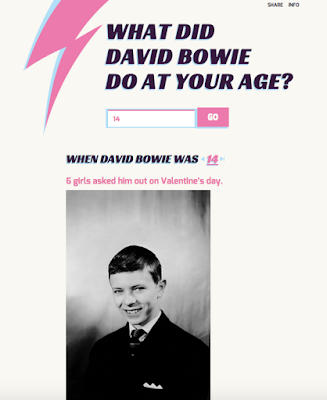 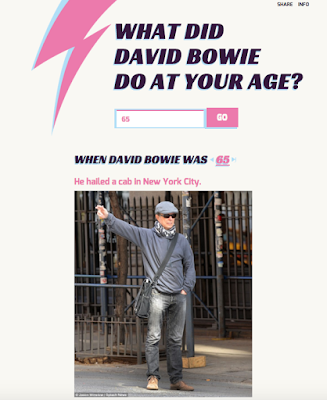 The what-did-Bowie-do-at-an-age-he-hasn't-reached is also dealt with ... 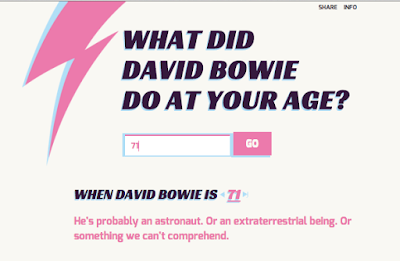 This brings the site closer to story telling than data visualisation. It's also more human. Mixing in a bit of humour and a bit of ordinary life make you want to keep prodding it with new numbers, precisely because it doesn't just spit out the usual biodata. And that's a useful thing to keep in mind.

Posted by Courtney Johnston at 20:21

It's such a great idea and I think would totally have legs in a GLAM setting - but that creates both excitement and dread in me.

You hit it on the nail that it's about the quality of the curation - not in the typical GLAM-completest sense, but in providing the best experience sense.

Maybe there are some other Kiwi unicorns we could try: Mansfield, Jackson, Hillary, Heke, Lorde/Ko (gulp), Iti, Hagar...?

Mansfield would be great! Hillary possibly? But I think it's got to be people who had interesting *lives* as well as careers -and people who have lived through the GLAMs audience optimal age-range (which I'm putting at late 20s to mid 40s, based on gallery visitation and FB use :)